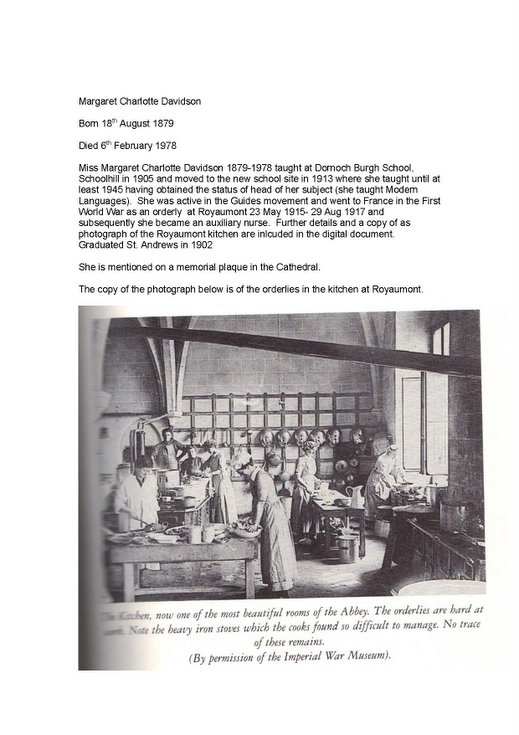 Miss Margaret Charlotte Davidson 1879-1978 taught at Dornoch Burgh School, Schoolhill in 1905 and moved to the new school site in 1913 where she taught until at least 1945 having obtained the status of head of her subject (she taught Modern Languages). She was active in the Guides movement and went to France in the First World War as an orderly at Royaumont 23 May 1915- 29 Aug 1917 and subsequently she became an auxiliary nurse. Further details and a copy of as photograph of the Royaumont kitchen are included in the digital document.
Miss Davidson's nephew confirmed that she was great friends with Mrs Rhyllis Llewellyn-Hacon, who owned "Oversteps" in Dornoch and further investigation revealed Mrs Hacon played host there in 1896 to the painter Conder. In the collection of the Aberdeen Art Gallery & Museums there is an oil on canvas painting 'The Shore at Dornoch 1896 by Charles Conder with details confirming the sitter as Amaryllis Robichaud. The museum object description states: "The lady sitting on the beach is Mrs Llewellyn Hacon (Mrs E C Robichaud) who was a friend of both Charles Conder and Toulouse Lautrec. She owned both this painting and the study for 'Aux Ambassadeurs Gens Chics' (also in the collections of Aberdeen Art Gallery & Museums). This study of his hostess captures the beauty and elegance for which she was famed."