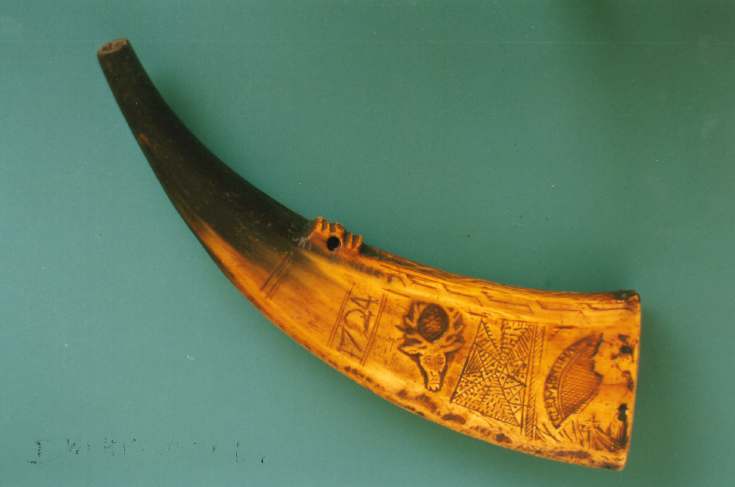 Four colour photographs of Arkyll Fraser's powder horn, which was found in his great-aunt's house near Kinlochbervie. The horn is dated 1724 and has a picture of Clementina, Bonnie Prince Charlie's mother. The powder horn originally belonged to one of the followers of Bonnie Prince Charlie. He escaped after the Battle of Culloden in April 1746 and it has been told that he hid in a Highland Glen known as Corriekinloch at the north end of Loch Shin. He remained there in hiding until all the feuds died down and Butcher Cumberland and his soldiers had moved south again. Having come out of hiding he moved to the west of Sutherland. This powder horn belongs to Arkle Fraser in Dornoch, having been handed down each generation. Arkle Fraser's great-aunt, Mary Fraser, lived in Balchrick, some 4 miles from Kinlochbervie, in a small croft house.
Picture added on 24 April 2008
Comments:
Your comment abov mentions 4 colour photographs. Do you have one of the other side of the horn? Many thanks ~ Thank you for your enquiry, I have emailed the picture to you. ~ Administrator.
Added by Marlene Wood on 11 June 2018