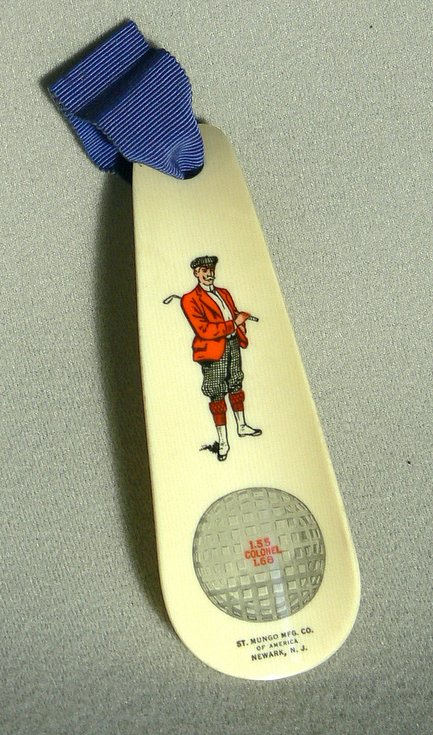 A small shoehorn made of an artificial material resembling ivory or bone, printed in red, white and black with an image of a smart gentleman wearing a cap, red jacket, plus fours and spats and holding a golf club. Underneath this is a large golf ball with "1.55 COLONEL 1.68" printed in red in the centre. Below this, in black, "ST. MUNGO MFG. CO. OF AMERICA NEWARK, N.J.". The shoehorn was given to the museum in a presentation case covered in dark blue velvet. The inside of the lid was padded and lined with blue satin, and the shoehorn was fixed to this lining by a short length of blue ribbon passing through a hole in the top of the shoehorn and glued to the satin. The bottom section of the case was lined with blue velvet. It had a glass cover and underneath this, spaces for four small goblets, all missing. The case was not retained. The shoehorn is accompanied by two sheets of information, identical apart from their design and the fact that one is slightly more up to date than the other. The sheets were made to fit inside the box. They are headed "Royal Dornoch Golf Club Over 65's Trophy" and explain that the shoehorn was given away as a promotional item by the manufacturers of the Floater golf ball in 1906. It belonged to Jack Mackay, who gave it to Denis Lovell "in appreciation of your sartorial efforts to brighten up the 'Geriatrics' of the Royal Dornoch Golf Club". It was then given as a trophy at the anniversary competition of the over 65s of the Wednesday Morning Seniors. The first sheet, which is printed on good quality card with a decorative blue and pink border, lists the winners from 1980 to 1998. The second sheet, printed on paper with a yellow and purple design, adds the winners for 1999 to 2001.
Picture added on 28 February 2010