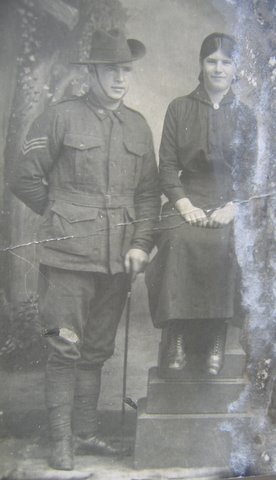 Monochrome photograph of siblings James (Jimmie aigh Dannagh) Cumming and my mother Maryann (Maryann aigh Dannagh) Cumming (Later Mackay) of 9 Front Street, Embo. James went to Australia in 1913 as a seaman and later worked as a stockman. He joined the Australian Army as a 20 year old on the 18/9/1914. He then saw service in the bloody Gallipoli Campaign where he was promoted to Corporal. Then saw service in Egypt and later on the 8/6/1916 disembarked at Marseilles, France to join the BEF and was promoted to Sergeant. He was badly injured by shell fire on the 6/8/1916 and was evacuated to England where he spent 8 months in hospital. He visited Embo between the 8-18/3/1917 when this picture was taken. On the 4/5/1917 he returned to Australia where he was discharged as medically unfit from the injuries to his right leg, arm and hand. He later returned to Scotland worked all of his life in Edinburgh but returned to 9 Front Street to live out his retirement with his wife Mina (Nee Gillie and also from Embo).
Picture added on 13 November 2009
Comments:
Interesting details on Jimmy,I knew him when I was a young boy growing up in Embo but had no idea about his heroism during the war years, another silent hero from our' wee village!
Added by John Mackay on 10 April 2016