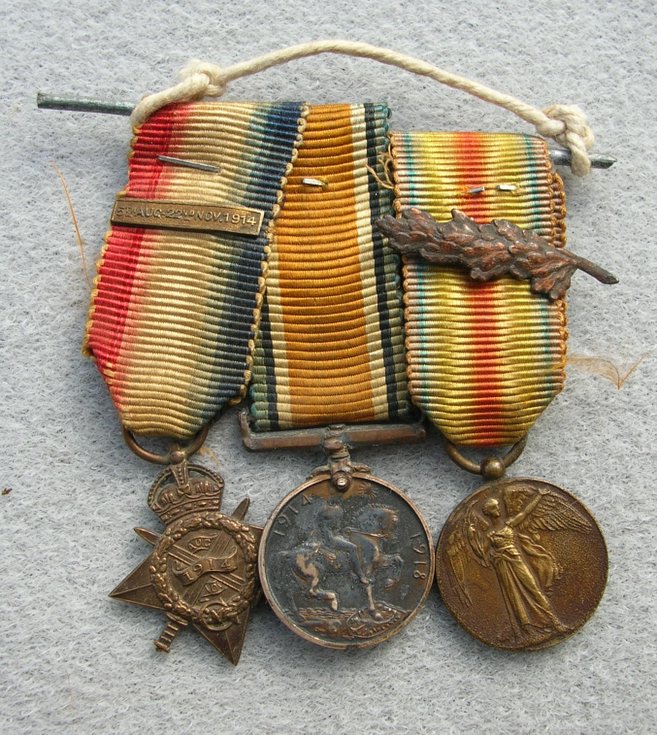 Set of miniature medals awarded for the service of Capt H R W Rose, Cameronians 1914. The set includes, on the left, the 1914 Star with bar, colloquially known as 'the Mons Star', awarded to all members of the British and Indian Expeditionary Forces who served in France and Belgium between 5 August 1914 and midnight on 22-23 November 1914. The Bar to the 1914 Star was awarded for those "who actually served under the fire of the enemy in France and Belgium" between the dates mentioned. The bar, the coveted award of 'the Old Contemptibles', was easily lost due to the way it was attached to the ribbon. In the centre is the British War Medal 1914-1920 approved by King George V for the successful conclusion of WW1 in November 1918, awarded to both civilians and armed forces personnel who performed 28 days mobilised service, or lost their lives in active operations before completing that period, between 5 August 1914 and 11 November 1918. (This medal is wrongly mounted, the Kings head should be to the front) On the right is the WW1 Victory Medal with the emblem in bronze oak leaves, denoting a Mention in Despatches between 4 August 1914 and 10 August 1920. The ribbon's colours are those of two mirrored rainbows. The key qualifying requirement was 28 days service within a theatre of military operations, and for the army this had to be overseas. In short, it was not possible to be awarded the Victory Medal unless qualified for the British War Medal. Recipients of the 1914 Star and 1914-1915 Star automatically qualified for both. The three medals became known as 'Pip, Squeak and Wilfred', characters in a comic strip which first appeared in the Daily Mirror on 12th May 1919 and became very popular in the 1920's coinciding with the issue of the medals to forces personnel.
Picture added on 06 October 2009