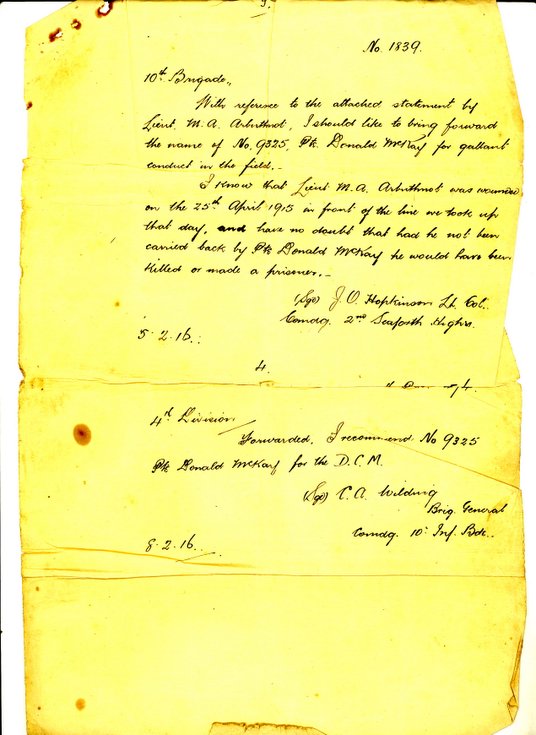 Handwritten paper dated 5 2 16 bearing reference No. 1839 addressed to 10th Brigade from Lieutenant Colonel Hopkinson Commanding 2nd Seaforth Highlanders referring to Lt Arbuthnot's statement (see 2008.086.052) concerning the gallantry of Private Donald Mackay. The paper footnote recommends the award of the Distinguished Conduct Medal and is signed by Brigadier General C A Wilding Commanding 10th Infantry Brigade and dated 8 2 16 [Donald Mackay was subsequently awarded the Military Medal]
Picture added on 06 March 2009
Comments:
Charles Arthur Wilding was my second cousin three times removed so this is of great interest to me. He was a career soldier, serving with the Royal Inniskilling Fusiliers and eventually commanding 2 Btn in France in 1914. He appears to have been wounded at the end of 1916 (he was awarded the Silver War Badge) and placed on the retired pay list in 1918. He emigrated to South Africa where he died in 1953. If anyone has further information, I will be delighted to correspond.
Added by Hugh Wilding on 14 July 2009
Charles Arthur Wilding was my Great Grand Father, I would love to hear from Hugh Wilding.
Added by Kay Napper on 08 October 2015