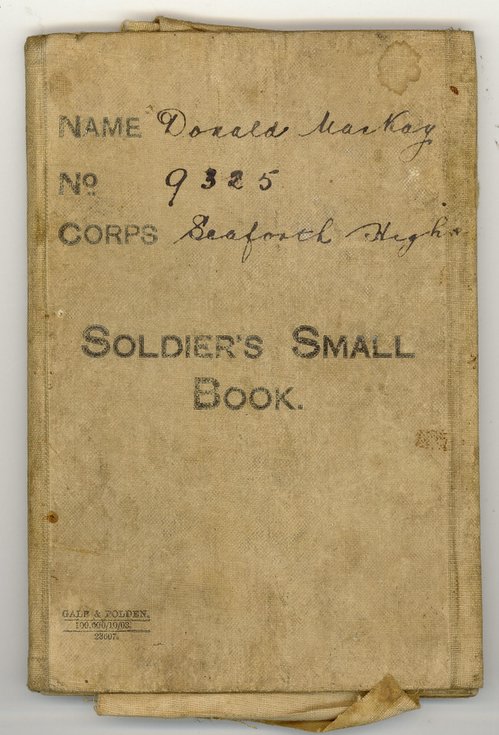 Soldier's Small Book providing a record of service for Donald Mackay from his attestation at Fort George of 29 Dec 1905 when he was enlisted into the Seaforth Highlanders, aged 20 years 4 months. The book with central title and name, number and Corps of Donald Mackay is show on the linen cover. The record gives his trade or calling prior to enlistment as Coachman with last permanent residence in Dornoch, height of 5' 5 and 5/8 inches. There are records of him passing the mounted infantry course at Aldershot in 1906 'First Class very good', his service in India from 15 Dec 06, with Field Operations in India in 1908, his award of the India Service Medal with clasp NW Frontier 1908 and Coronation Durbar Medal 1911. The final page lists his musketry qualifications. In addition to the soldier's record of service the book provides instructions and guidance on discipline, badges of rank of officers, 'how to prevent sore feet', the care of a rifle and clothes and guidance on field cooking, with recipes.
Picture added on 02 March 2009