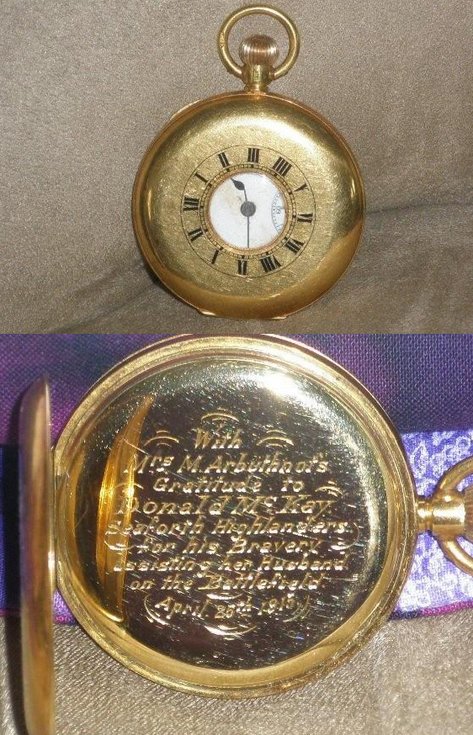 Colour photographs of a watch presented to Donald Mackay. On the inside back plate is an inscription: 'With Mrs Arbuthnot's gratitude to Donald McKay (sic) Seaforth Highlanders for his Bravery assisting her husband on the battlefield April 25th 1915'. (See picture #7152 for a letter written by Lieutenant Arbuthnot concerning Donald Mackay's gallantry which eventually led to the award of a Military Medal).
Picture added on 27 January 2009
Comments:
I am interested to know which Donald Mackay this splendid watch was presented to, can anyone identify him please?

[This watch was presented to Lance Sergeant Donald MacKay service no 9325 who was born in Embo 18 July 1984. Full details can be found in the WW1 Roll of Honour accessed from the War Memorials tag on the homepage of www.historylinks.org.uk/ - Administrator]
Added by John Mackay on 10 April 2016
Donald Mackay who came from Embo was my great uncle. He enlisted in the Seaforth Highlanders and served on the Western front. He was killed in action in October 1916 at Snagg Trench. He is buried in the Caberet Rouge Military Cemetery near Arras in France. I have visited his grave. The watch pictured above is in the possession of a relative in Australia.
Added by Tony Lincoln on 15 June 2016
Many thanks for the additional information.
Added by Administrator on 18 June 2016
Dear Tony

At present, we are compiling a presentation called reflections of WW1, to pay tribute to the servicemen and women who served the British forces.

Are you able to provide any information on Donald's upbringing, family, occupation prior to the War, where he lived in Sutherland etc?

If you can, it would be great to incorporate that into the presentation.
Added by Stuart Campbell on 02 July 2017