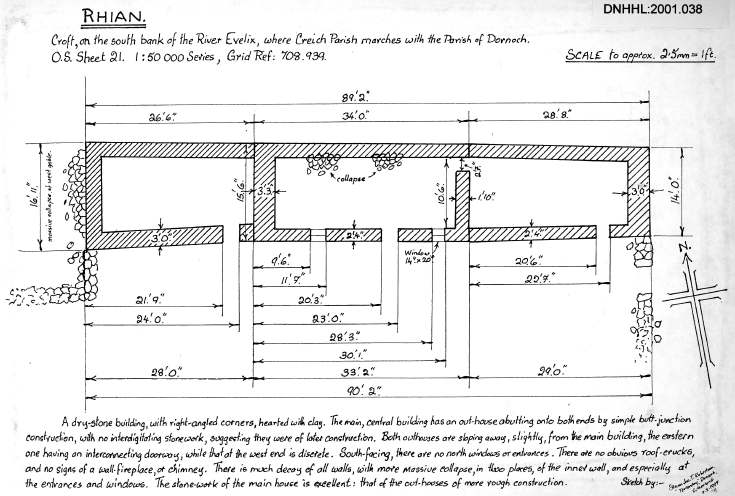 Plan of croft house at Rhian with text explaining its method of construction. Mounted on a display board with 2001.035 and 2001.036.001.RHIAN : A SUTHERLAND DRY-STONE CROFT HOUSE.
(Text underneath sketch)
A dry-stone building, with right angled corners, hearted with clay. The main central building has an outhouse abutting onto both ends by simple butt junction construction with no interdigitating stonework, suggesting they were of later construction. Both outhouses are sloping away, slightly from the main building, the eastern one having an interconnecting doorway, while that at the west end is discrete. South-facing, there are no north windows or entrances. There are no obvious roof crucks, and no signs of a wall fireplace or chimneys. There is much decay of all walls, with more massive collapse, in two places, of the inner wall, and especially at the entrances and windows. The stonework of the main house is excellent: that of the outhouses of more rough construction.
(Text below above on same board)
RHIAN : A croft house of probably some 300 years standing, in the valley of the Evelix River, in East Sutherland, is a discrete dwelling set in its own field system, with its own corn-drying kiln a hundred yards or so from the house. It is of interest in that, while of dry-stone construction, with clay hearting, it epitomises the utilisation of more modern dressed stone vertical walls, with right angled corners, using interlocking corner blocks, and so may be taken as a further transition stage between its largely turf walled progenitor and the cement and stone construction of its current counterpart. Its generic predecessors were the sloping walled, right angled cornered, dry-stone houses of Miss Grant's illustration, and the round ended version, of similar construction, there being no hard and fast demarcation in the evolution of the Highland croft house, though the central and east Highlands tended to anticipate more modern construction earlier, being less remote from the civilising influence of trade with the Continent, and were considerably less bleak. One would, however, have tended to equate the use of dressed stone, in association with rectilineal construction with such concurrent advances as, possibly, recessed fireplaces and intramural stone lined chimneys, but Rhian highlights a definite phase in Highland house development where the roof treatment lagged behind the advancing capabilities of more modern masons: or was it simply a matter of economy? Again, there are no traces of roof crucks.