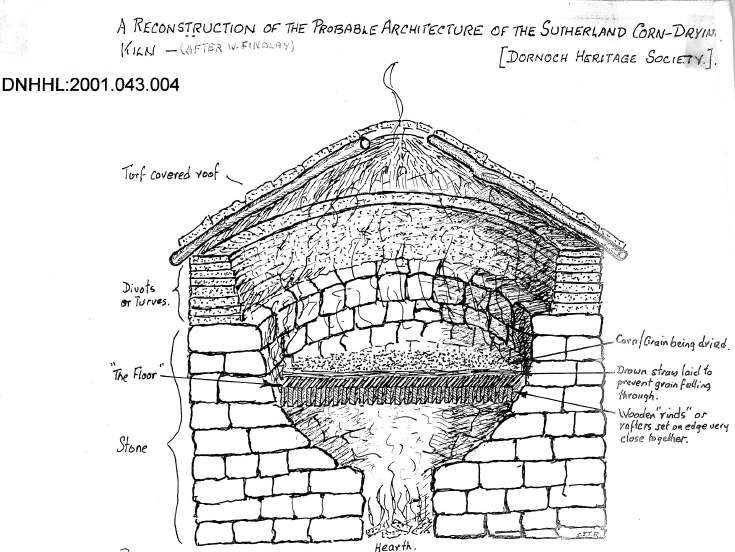 Reconstruction of the corn drying kiln at Strath Laro clearance settlement Puill Fraoich site . In the earliest basic construction (above) “The grain was placed on rafters covered with straw” (Dr. Patrick Graham in “The Agriculture of Stirling”). The Statistical Account on Kirkmichael in Ayrshire in 1793 states that “They were miserable machines at which much time was consumed and the grain horribly abused”. George Robertson, in 1829 reported “In the old kilns which were floored with wooden rafters, laid at small intervals from each other, to prevent the corn from falling through, were covered with loose straw on which (the grain) was spread over a fire kindled in the “loggie”. Accidents not infrequently took place owing to the fire catching the straw and thus setting fire to the kiln and burning the corn.”

Later construction of the “floor” of the kiln involved the same wooden rinds or rafters, but laid with slates, tiles or flat bricks, perforated with a series of small holes.

Professor John Cruichshank of Aberdeen wrote that “Instead of the baulks and drawn straw, perforated bricks and tiles came into use about 1798. The holes in the tiles were small enough to prevent the grain from falling through”.
Picture added on 24 April 2008