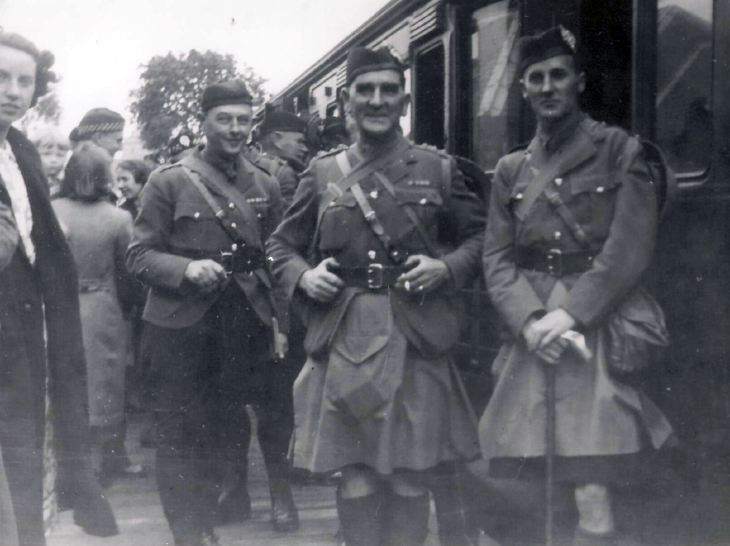 Monochrome photograph of the departure of members of the Dornoch Company, 5th Seaforth TA to guard the oil tanks at Invergordon. The remainder of the company stayed in Dornoch for a further 6 months billeted in the Masonic hall. R to L: 2nd Lt Andrew Budge (killed in North Africa); Capt. Jim Macdonald (wearing WW1 medal ribbons); Pipe Major Hugh Grant (over Capt Macdonald's shoulder), later head keeper at Skibo; Ruby Budge (on extreme R). Note kilt covers (function unknown).
Picture added on 10 October 2008
Comments:
I'm very impressed by this collection by and large, but occasionally the year tends to be a bit out - in this case I think it should be 1939 rather than 1914, as at least two of those in this photo appear to have already collected their campaign ribbons for the 1914-18 War.
Added by Willie Morrison on 15 March 2009
I'm trying to build up a history of my wife's uncles all born at Killearnan and all served in the SeaForths and subsequently captured at St Valery en Caux. They were John James Mackay, Donald Mackay, William Mackay and Alexander Mackay. I've got their birth and death records and I know the whole family ( the 4 uncles + my wifes mother Feirley and Aunt Dolly ) spent some years at Kerrysdale Farm Gairloch
Added by Harry Butler MBE on 08 November 2009
"Note kilt covers (function unknown)". Kilt covers protected the kilt from dirt and wear and tear, it also meant the dark tartan was covered in a neutral khaki material. It would cover front and back.
Added by Adam Brown on 18 September 2010
I am looking to put a face to a name. Can anyone help? My Grandad's brother, Private James Close, of the 4th Bn Seaforth Highlanders, died on 26/4/17 age 32 in 11 General Hosp. Camiers France. Buried in Etaples. He was from Belfast. I would be very grateful.
Added by Eileen Smyth on 25 June 2014