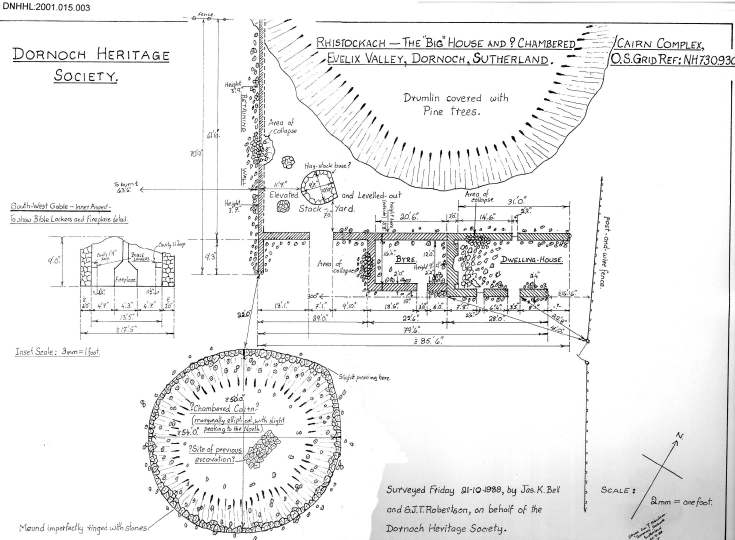 Plan of the Rhistockach big house and possible chambered cairn - a post clearances abandonment
NOTES:
The house and byre are S-W facing, backing upon a fir covered hillock, both well protected from the prevailing winds and an extremely pretty site. The buildings are of mixed hewn, and river rounded stone with walls varying in thickness from 2’4” at the front of the house to between 2’0” and 2’2” in the byre. They are of dry stone construction, with clay bonding, and beautifully laid and layered.

The east end gable with parts of its adjacent walls have been removed without trace, by pillage. If equally balanced about the front door, the house would have been 36’6” long, approximately over gables. An interesting feature is the provision of two ‘bible lockers’ in the remaining gable, against the walls on either side of the fireplace. The byre is an additional building, its walls abutting against the gable end with no interlocking of the stones of each building. The ground to the rear has been built up, behind a retaining wall, into a level space – probably a stock yard. Here a large horseshoe shaped feature possibly represents a hay stack base.

A large mound to the S-W of the house has features suggestive of a possible chambered cairn – thought not in the type of siting such cairns tend to be found. It is not recorded on O.S. maps, nor mentioned in ‘The Second Report and Inventory of Monuments and Constructions in the County of Sutherland’ (1911), and therefore possibly an artifact. It might, on the other hand, be a fluvio-glacial drumlin of mixed gravel and rounded stones – ‘boulder clay’ – with an imperfect ring of large stones outside to finish it off : but there are signs of old excavation from the top, leaving a stone filled trench to suggest the possibility of it having been of chambered cairn origin originally. The surmise has involved no exploratory digging currently.

The full set of drawings and photographs of this site have been mislaid, but they show a smaller, and much older crofting house, of traditional design, also of dry stone and clay construction, a hundred yards or so N-E of the ‘Big House’ site, referred to as the ‘Small House’, which is obviously of much older vintage. Both houses were inhabited when the 1871 census was made, the returns showing two unrelated families of Mackay – Hugh (62) and Marion (65) his wife in one, while Thomas (47), his wife Jane (35) and two children, Barbara (2) and John (1) respectively. Barbara was to become the mother of Mrs C. Grant, Dornoch. It is not known exactly when the houses were abandoned, but the reason was the extreme waterlogging of the bottom of the valley, which led to the sheep becoming diseased and dying off.

To the S-W of the ‘Big House’, built parallel to the steep slope of the hillside – probably to evade waterlogging – the remains of a typical long-house exist. Of considerably greater antiquity, it could possible derive from the practices of the Vikings, who penetrated far inland, in these parts in search of arable land. It had been a very long, very narrow building, of turf and stones divided by possibly two cross walls, and whose outline remains barely proud of the ground.

Today the site remains much waterlogged, despite attempts at drainage, and it is no longer lived on, though the land is occasionally used for grazing by a contiguous croft. So we have evidence of continuity of habitation – until recently – and of small farming on this little riverside site, going back perhaps even as far as the latter Viking influence, around 1300A.D., for these old long-houses required only marginal re-patching of walls, with stones and turves, and re-thatching with any available material from wattles to heather, or even peat tiles: generation after generation using the same site and walls.
Picture added on 24 April 2008