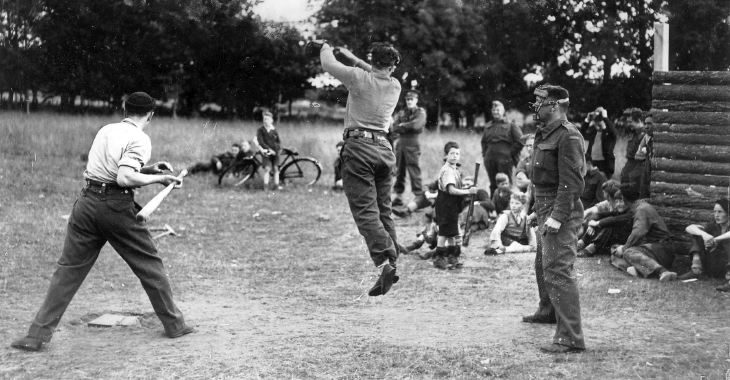 Monochrome photograph of members of the Canadian Forestry Corps, based in Invernesshire in World War 2, playing soft ball with children looking on. One man appears to have just hit the ball while another is leaping to try and catch it. The game is taking place in front of what appears to be a partially completed log hut. A typed paper label stuck on the back says: "Y920 The Canadian YMCA provided entertainment and sports equipment for the men of the Forestry Corps stationed in Scotland. Even after a hard day's work in the forests or sawmills the men are always ready for a game of soft ball. OPS A Company of the CFC striking in a game against another Company. L to r Pte EE Clark, Victoria BC (striking), QMS Clark, Ottawa (jumping) and Corpl A Gaudreau, Kamloops BC (umpire). A number of Scottish youngsters look on." Handwritten beside this label are the names Col Ferguson and Maj Kennedy. Pin holes at the corners.
Picture added on 07 July 2008
Comments:
In the list of names with the August 1941 company photo of the 18th Coy he is listed as
E. K. Clarke, Victoria, BC
Added by Robert J Briggs on 15 December 2011