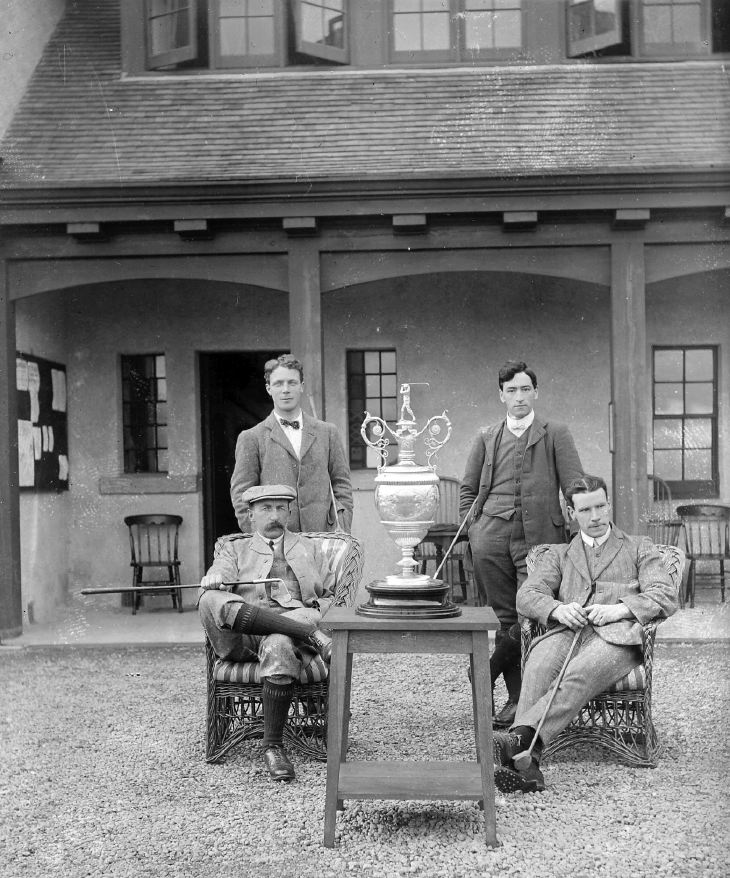 Photograph of four golfers with trophy in front of Dornoch clubhouse. Written on back: Winners of the Northern Counties Cup Quartette 1911. Sitting left to right John Sutherland, Tommy Grant now Pro at Tenby. Standing left to right Donny Grant, Walter Matheson. Mr Sutherland at 47. In his book on the Royal Dornoch Golf Club, Donald Grant records that Walter Matheson was killed in WW1. He is listed on the Dornoch War Memorial. As a Private in the 5th Battalion Seaforths he was killed on 13 Nov 1916 at Beaumont Hamel aged 31. He has no known grave and is commemorated on the Thiepval Memorial France Pier and Face 15C
Picture added on 24 April 2008
Comments:
Hello,
Researching my family tree I have found Walter Matheson to be my 2nd cousin 3 times removed. (His grandmother Helen Sutherland and my 3rd great grandfather Alexander Sutherland were siblings). According to his date of birth, 9/9/1885, he would have been 31 years old when he was killed at Beaumont Hamel on 13/11/1916 rather than 28. Thank you for uploading this photo so that he can be remembered in happier times.

[Administrator - Most grateful for your comment. The Commonwealth War Graves Commission (CWGC) certificate recording Walter was killed in action shows his age as 28 and this was accepted and used in museum records. However, on receipt of your comment we have checked the 1911 Census and this shows Walter aged 25, confirming the date of birth you have now given us. Whilst we will change the museum records, from past experience, the only means of correcting the (CWGC) record is by application, preferably by a relation, with provision of a copy of Walter's Birth Certificate. Perhaps you will wish to pursue this course given the importance of CWGC records.]

Walter Matheson was my GGG Uncle he is of the same
Matheson Family as was my late Grandmother Johan Jessie Gordon nee Matheson, If want to get touch with me, Please do so at the email address below.

Thanks John Gordon.
Added by John Gordon. on 15 December 2017
Hello John, back in December I sent you an email about your connection to Walter but did not get a reply. I found Johan Jessie Gordon (nee Matheson) to be the daughter of Alexander Matheson. Alexander was cousin to Walter. Alexander's father was John Matheson. John's father was Alexander and his mother was Helen Sutherland.
Added by MASIS PANOS on 21 January 2018
Hello Masis Panos.

Email me Direct at - jwgordon50@hotmail.com
Added by John Gordon. on 09 February 2018