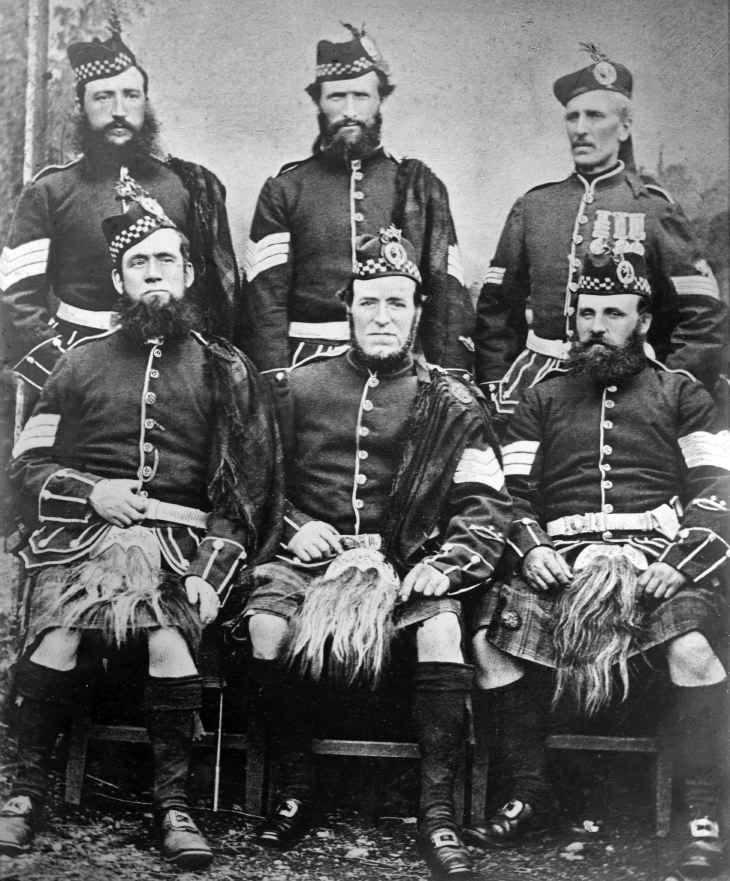 Monochrome photograph of a group of six sergeants of the Sutherland Highland Rifle Volunteers, mounted on cardboard. Three members of the group have marksman badges on their sleeve. Four members have a shoulder cape and glengarry bonnet; the fifth sergeant has a different bonnet, a balmoral, and three campaign medals; it is likely that he is a colour sergeant of the regular army assigned to the volunteer force. Further information is contained in an accompanying letter, with copy of this photograph and of Sergeant Robert Mackay who may be one of the group, and a colour photograph of the various uniforms worn by the Sutherland volunteers. (A studio photograph of Sgt Robert Mackay in full dress uniform with rifle, shooting badges and medals is at picture #10659 The hose worn can be seen in the colour photograph at picture #11164)
Picture added on 24 April 2008
Comments:
A portrait of Pipe Major James Wilson by David Cunliffe in 1852 shows the 93rd Sutherland Highlanders wearing a balmoral bonnet similar to the one the sergeant with the medals is wearing. The medals are for the Crimean War (light blue with yellow edging which shows as black), Turkish Crimean War Medal (red with black edges) and the Indian Mutiny (red and white stripes) which would also tie in with him being a permanent staff instructor from the 93rd Highlanders which served in both campaigns. (Although the 42nd, 72nd and 79th Highlanders also served in both campaigns).

The Sutherland companies of the SHRV all adopted kilts in 1867 (Rogart had worn them since 1860). They adopted spats over their hose in 1870 so assuming this is the Dornoch and not the Rogart company, this dates this photograph to between 1867 and 1870.