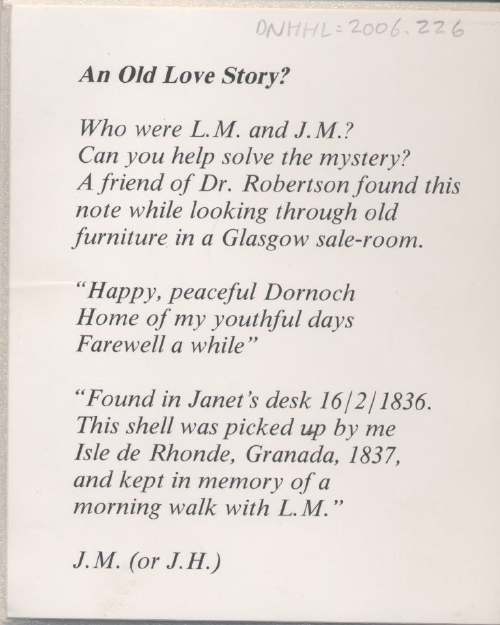 Display board with title 'An Old Love Story' including the poem "Happy, peaceful Dornoch, Home of my youthful days, Farewell a while" and explanation "Found in Janet's (Fraser's) desk 16/2/1836. This shell was picked up by me Isle de Rhonde, Granada 1837, and kept in memory of a morning walk with L.M" Janet Fraser married Lewis Hoyes about 1838. (see other documents relating to Provost Fraser, including family tree picture #5369 )
Picture added on 24 April 2008
Comments:
Could the JM. (or JH) be John Hoyes, Lewis Hoyes' brother?

Added by John Hoyes on 12 January 2014
This comment is for the administrators:

I'm researching for a PhD on Highland-Caribbean migration and this snippet is very interesting to me.

I'm wondering, does the original note still exist? Or any copies of it?

To solve the mystery of the love story it would be useful to know whether the note was all written in one hand or not.

It seems likely to me that the poem ("Happy, peaceful..."), and the closing note ("This shell...") were both written by Janet, but the third-person reference to Janet in the middle sentence "Found in Janet's desk..." doesn't seem to make sense... Could this part have been written by someone else?

If this can be established my interpretation would be as follows:

1. The "Happy, peaceful..." poem was written by Janet before departing for Grenada sometime before 1836 and left in her desk in Scotland.

2. The poem was found in 1836 by a relative who remained in Scotland and they added the note: "Found in Janet's desk".

3. When Janet returned to Scotland with Lewis Hoyes to be married in 1838 she added the line "This shell was picked up by me...". It appears the poem and the shell were kept together as a memento of her courtship with Lewis Hoyes in Grenada. ~ Many thanks for your comment and details about the poem. Unfortunately, we do not have the original poem here at the museum and there are no details as to where it might be found. ~ Administrator.
Added by Michael on 25 August 2016
Recent online posting by Moray Family History society indicates the wedding took place at Mount Parnassus plantation, Grenada, formerly owned by George Gun Munro, whom Lewis Hoyes would have known, and not in Scotland at all. ~ Many thanks for your comment.
Added by Jim Brennan on 26 May 2017
Thank you Jim. I thought they were married in Scotland too
Added by Mr John A Hoyes on 06 June 2017