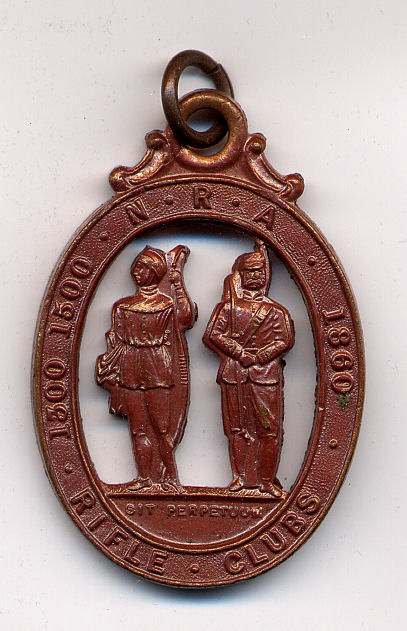 Oval bronze medal (a) with an outer band enclosing the emblem of the National Rifle Association - two figures, one holding a bow and arrow, the other a rifle - with the motto SIT PERPETUUM below. 1300 1500 NRA 1860 RIFLE CLUBS round outer band.
The medal has a ring at the top which fits over a hook in the presentation box (b), which is covered in red paper with a gold border. The base of the box is lined with purple velvet and the lid with cream silk stamped GOLDSMITHS JEWELLERS & MEDALLISTS BRAVINGTON'S 298 PENTONVILLE RD KING'S CROSS & 71 LUDGATE HILL EC.
Part of the Robert Mackay collection.
Picture added on 24 April 2008
Comments:
I have one of these medals but not sure to which of my forbears it belonged! Does it mean it was awarded in 1860? It is in a box- it rests on purple velvet and the top is marked Elkington & Co.Ltd 22 Regent St. SW.

Many thanks for your comment. The date 1860 denotes the first meeting of the National Rifle Association at Wimbledon on 2-7 July of that year - Administrator
Added by Elizabeth on 10 May 2014