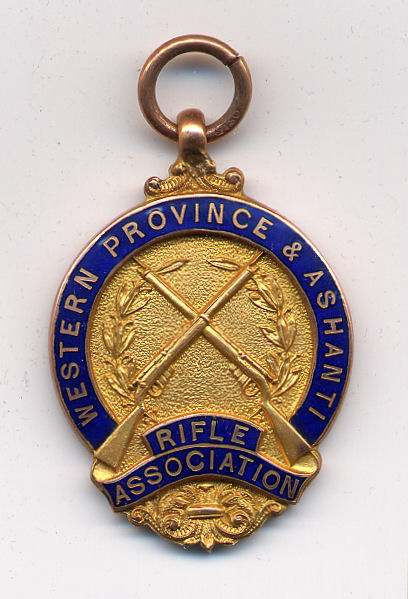 Circular gold medal (a) with a wreath and pair of crossed rifles in the centre. The border is enamelled in blue with the words WESTERN PROVINCE & ASHANTI RIFLE ASSOCIATION in gold. Maker's mark of BS stamped on the back, with hallmarks 9, .375, anchor, X (Birmingham, 9 carat gold, 1922/23). The back is also engraved WON BY (blank) 1924. The medal has a ring at the top which fits over a hook in the accompanying presentation box (b), which is covered in red paper. The base of the box is lined with black velvet and the lid with cream satin with the retailer's name printed on it: Goldsmiths and Jewellers. Bravingtons 296 & 298, Pentonville Rd King's Cross and 71, Ludgate Hill.
Believed to be membership or prize badge belonging to Robert Mackay, although it is not on the inventory of items bequeathed by him to the town council..
Picture added on 24 April 2008