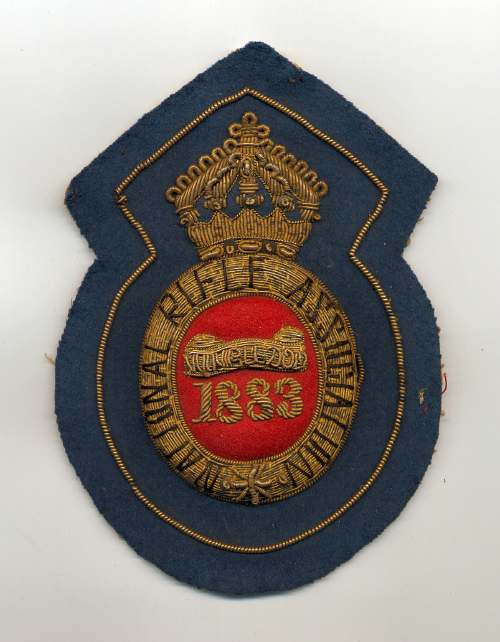 Embroidered raised badge in the shape of an oval with crown above, on a backing of blue felt, hessian or similar, and paper. The borders of the oval and crown are worked in metal thread with sequins. The words NATIONAL RIFLE ASSOCIATION are embroidered in black round the border, and WIMBLEDON 1883 is worked in metal thread on a red felt background in the centre. The whole design has an outer outline of metal thread.
Part of the Robert Mackay collection.
Picture added on 24 April 2008
Comments:
This is the gold badge awarded to the winner of the Queen's/ Kings Prize at Wimbledon, now Bisley. The prize is the premier shooting prize in target rifle shooting. It commenced in 1860 when Queen Victoria opened the first meeting on Wimbledon Common. The Queen gave £100.00 (our current Sovereign continues her patronage as does HRH The Prince of Wales with his own prize). The National Rifle Association adds a gold medal (shown elsewhere). Over the years the conditions of the competition have varied too much to list here. See the NRA website for more details. The other similar but smaller badges in the collection are awarded to competitors in the final of the competition. It started with the top 30. Then 40, then 60.
Then, as now, the top 100 receive the smaller badge. In the 1870s a large silver badge was given to the winner of the second stage. In the 20th Century a bronze badge started to be given to the winner of the first stage. These continue today along with large silver and bronze medals. In the 1950s a silver and bronze badges were added to the first and second runner ups in the final. The first stage is 2 sighting shots and 7 rounds each at 300/500 and 600 yards. Maximum score 105. The top 300 scores shoot the second stage 2 sighters and 10 rounds to count at 300/500 and 600 yrds. Maximum score 150. The top 100 who get the badge shoot the final 2 sighters and 15 rounds at 900 and 1000 yards. Maximum score 150. The scores in the second and third stage are added together to give a final maximum score of 300.
In 153 years (less war years) the Sovereigns Prize has only been won by a woman on 2 occasions. The first, in 1930, by Miss Margorie Foster and the second, in 2000, by Miss J. Hossack (Scotland). The Prize has been won by the same person on three occasions. The late Arthur Fulton in 1912/28/31; Alain Marion of Canada in 1980/83/96 and Anthony Ringer from Norfolk in 1992/97/2001.
The Fulton family is the only family to have had three members who all won the Sovereigns Prize. George, 1888, father of Arthur and then his son Robin in 1958. When Marjorie Foster won in 1930 the village of Frimley in Surrey sent the village fire engine to take her home in triumph, a subsequent collection was made and she was given a sports car to celebrate her win. Subsequently she made the highest score in the Territorial Army Championship and should have received the Kings Medal for Champion Shot but allegedly someone high up in the War Office was said to have stated that HE was not prepared to see a WOMAN wearing the Kings Medal. The medal was subsequently awarded to the runner up. Miss Foster was a Captain in the FANY during WW1 and subsequently the Women's Transport Corp and she was told this made her eligible to take the medal. King George VI opened the competition to civilians and it is now open to anyone entering the Competition not just members of the Commonwealth.
The record for appearances in the final was 28 held by Arthur Fulton MBE, DCM. He was awarded the DCM in WW1 where he served as a sniper with the Queens Westminster Rifles.
In the modern era the record is 29 held by Paul Kent who is still competing.