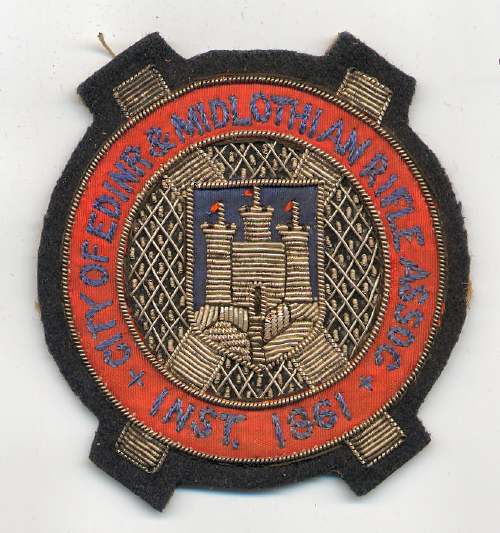 Embroidered raised badge in the shape of a circle with saltire behind, the ends of which project from the edge of the circle, on a backing of dark blue felt, hessian or similar, and paper. In the centre of the circle is a shield with a castle, the shield on a background of diamonds. Round the rim of the circle are the words CITY OF EDINBURGH & MIDLOTHIAN RIFLE ASSOC INST. 1861 worked in blue thread on a red background. The shield, castle, diamonds, saltire and edges of the circle are worked in metal thread.
Part of the Robert Mackay collection.
Picture added on 24 April 2008
Comments:
I have a medallion dated 1863, can you give any details about this.?

We have no further information about this organization, however you may be able to access the publication 'History Of The Queen's City Of Edinburgh Rifle Volunteer Brigade: With Accounts Of The City Of Edinburgh And Mid-lothian Rifle Association, The Scottish Twenty Club, Etc...' ISBN-13: 978-1293378779 via your local library - Administrator.
Added by Jean MacLeod on 22 May 2015
I have a cup 180mm high marked City of Edinburgh and Midlothian Rifle Association Young Shots Challenge Cup Presented by Mr. R.C.Kennedy 1908. on reverse side. Won By--5 names 08 to 13. I think it belongs back in Scotland. I guess more important things were happening in 1914 & somehow it came to Australia,as my father may have lived in 41 &47 William St near Edinburgh Castle in 1918-21 so there may be a family connection.
Added by M.J.McAulay. on 03 October 2015
I have three bronze (I guess) medals which my great grandfather won in the mid-1800's, for rifle/target shooting in Scotland. Two are from the National Rifle Association and the third is the same as the image above......with "Caledonian Challenge Shield 1863" on one side ……and, “City of Edinburgh and Midlothian Rifle Association 1861" on the other side. - Thank you for your comment. Admimistrator
Added by Tom Hogg on 02 July 2019