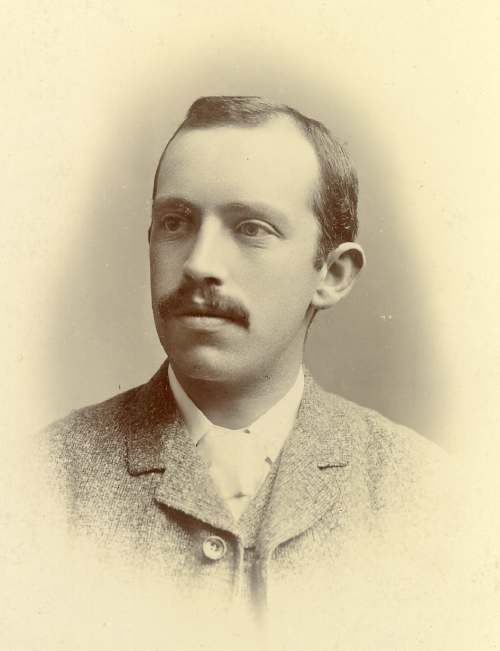 Monochrome photograph of John Sutherland, with a pencil inscription on reverse by Donald Ross "John Sutherland Dornoch a grocer, in his shop Don met Janet the first time". In an accompanying note the donor commented: "So wrote my grandfather . I think he must have been struck by her at once, as on many photos he notes "Janet when I first met her", "Janet when she and I...". There is some uncertainty that this photograph is of the John Sutherland associated with the golf course.
Picture added on 24 April 2008
Comments:
To me there is no doubt at all that the gentleman in this photo is NOT the John Sutherland of golf club fame. Firstly, he looks nothing like the family album photos of the latter as a young man (for example, at 2014_028_24). Secondly, I can’t imagine Donald Ross referring to his renowned golfing mentor merely as “a grocer”! Finally, although the famous John Sutherland had several business interests, I’ve never heard it suggested that running a grocer’s shop was one of them.

[Thanks for your observation. As mentioned in the acquisition description, the donor shared your doubts that this was a photograph of John Sutherland of Golf Secretary fame. Administrator ]
Added by David MacLean on 28 November 2015