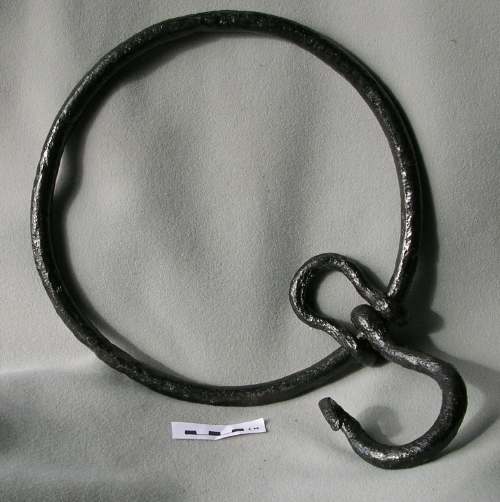 large circular iron ring with moveable hook and eye, painted black. The Scottish Fish Museum suggested that the object comes from a sailing boat, most likely a lugger, either a Fifie or Zulu, both of which were used for fishing up and down the east coast. It is called a traveller and its functions was to fix the yard (length of timber along the top of the sail) to the mast while allowing it to travel up and down so that the sail could be raised or lowered. The hook and eye were used to attach the ropes needed to haul the sail up or down. Some boats had a rope with parrel beads instead (like a large necklace around the mast) and the beads reduced the friction of the rope moving up and down. There is a very good chapter on luggers in "Sailing Drifters" by Edgar March which gives a lot of detail on how they were operated and the equipment used.
Picture added on 24 April 2008