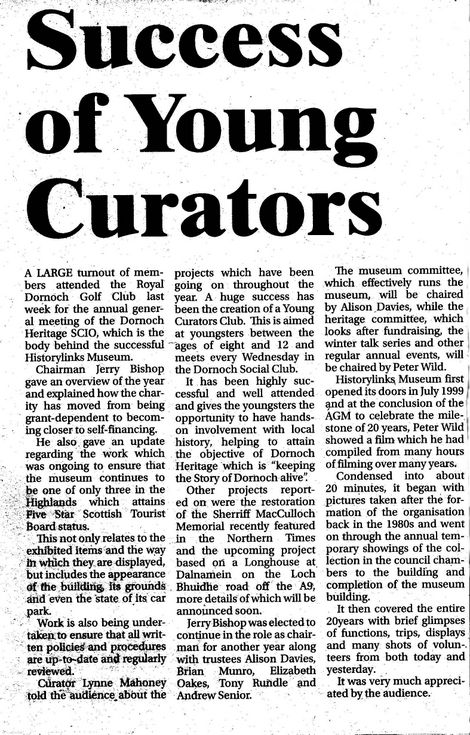 Copy of an article published in the Northern Times of Friday 18th October 2019 with the title 'Success of Young Curators'. The article reports on the large turnout of members for the Annual General Meeting of the Dornoch Heritage SCIO held on Thursday 10th October 2019 at the Royal Doroch Golf Club. Following a report by Chairman Jerry Bishop providing an overview of the year, he explained how the charity had moved from being grant-dependent to become closer to self financing. He also gave an update regarding ongoing work to ensure Historylinks Museum continue to be one of only three in the Highlands attaining the Five Star Scottish Tourist Board status. In a following report by Curator Lynne Mahoney there was focus on the huge success following the creation of a Young Curators Club, aimed at youngsters between the ages of 8 and 12, which meets eventyh Wednesday in the Dornoch Social Club. The hands-on involvement of the club us helping in the overall achievement of the objective of Dornoch Heritage to "keeping the Story of Dornoch alive". A final report was given on the work of the Museum Committee, concluded by the showing of a film by Peter Wild celebrating the milestone of 20years since Historylinks Museum opened its doors in July 1999.
Picture added on 09 January 2020 at 11:57