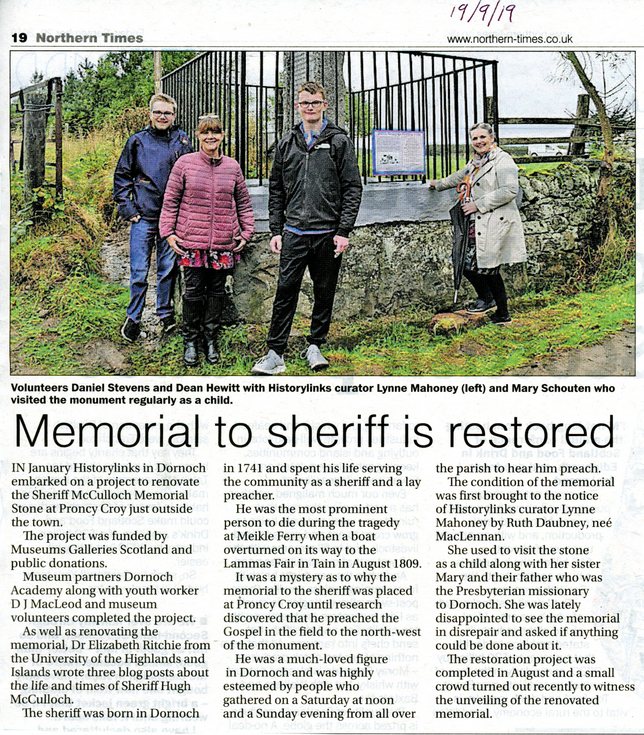 Extract from the Northern Time of 19 September 2019 with the title 'Memorial to sheriff is restored' reporting on the Historylinks project which launched in January 2019 to renovate the Sheriff McCulloch Memorial Stone at Proncy Croy just outside Dornoch. The project was funded by Museums and Galleries Scotland and public donations with the renovation undertaken by museum partners Dornoch Academy along with youth worker D J MacLeod and museum volunteers. Additionally, Dr Elizabeth Ritchie from the University of the Highlands and Islands wrote three blog posts about the life and times of Sheriff Hugh McCulloch. He was born in 1741 and spent his life serving the community as a Sheriff and lay preacher. He was the most prominent person to die in the Meikle Ferry disaster when a boat overturned on its way to the Lammas Fair in Tain in August 1809. The memorial was erected at Proncy Croy because he preached the Gospel in the field to the north west of the site. The accompanying colour photograph shows two volunteers Daniel Stevens and Dean Hewitt with Historylinks Curator Lynne Mahoney and Mary Schouten on the right who visited the memorial regularly as a child.