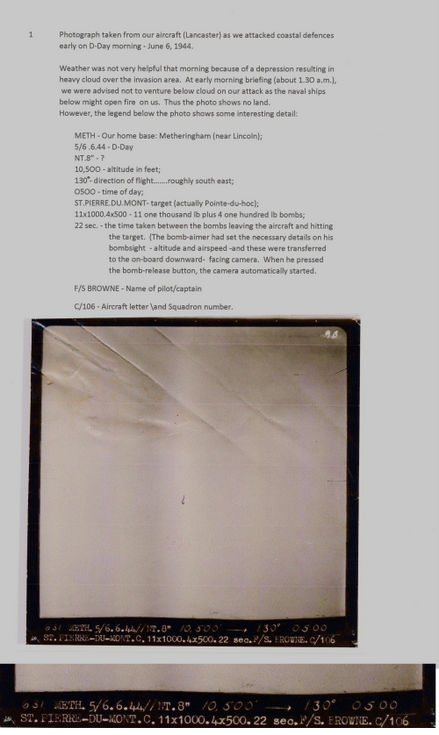 The second document relating the personal experience of Gilbert Gray during the D-Day Landings provides details, with an attached monochrome photograph of the bombing operation of 106 Squadron attacking coastal defences early on the morning of 6 June 1944. The photograph shows only a grey mist and is explained in the accompanying text "because of a depression resulting in heavy cloud ...we were advised not to venture below cloud on our attack as the naval ships below might open fire on us. Thus the photo shows no land. However, the legend below the photo shows interesting detail." The legend is interpreted as: METH -home base Metherington; 5/6 6.44 - D-Day; NT8" - ?; 10,500 - altitude feet; 130 - direction of flight c SE; 0500 - time of day; ST PIERRE.DU.MONT - target (actually) Pointe-du-Hoc; 11x 1000.4x500 - 11 one thousand lb plus 4 one hundred lb bombs; .22 sec - the time taken between bombs leaving the aircraft and hitting the target, (The bomb-aimer hasd set the necessary details on his bombsight - altitude and airspeed and these were transferred to the on-board downward-facing camera. When he pressed the bomb-release button the camera automatically started.; F/S Browne - Name of the pilot/captain; C/106 - aircraft letter and Squadron number.