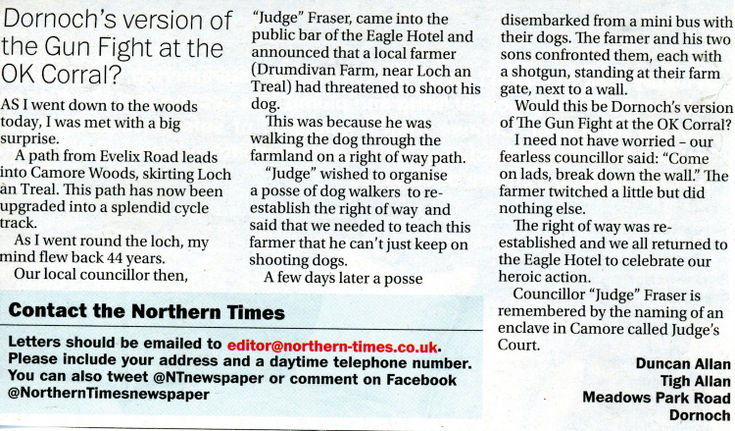 Extract from the Northern Times June 2019 with a letter from Duncan Allan with the heading 'Dornoch's version of the Gun Fight at the OK Corral'. It relates the story of a local councillor 'Judge' Fraser entering the public bar of the Eagle Hotel annoucing that walking a local farmer of Drumdivan Farm near Loch an Treal had threatened to shoot his dog. 'Judge' wished to organise a posse of dog walkers to re-establish the right of way. A few days latter a posse disembarked from a mini bus with their dogs. The farmer and his two sons confronted them, each with a shotgun, standing at their farm gate, next to a wall. Would this be Dornoch's version of 'The Gun Fight at the OK Corral'? The fearless councillor said "Come on lads, break down the wall". The farmer twitched a little but did nothing else and the right of way was re-established, with the posse returning to the Eagle Hotel to celebrate their ''heroic action''.