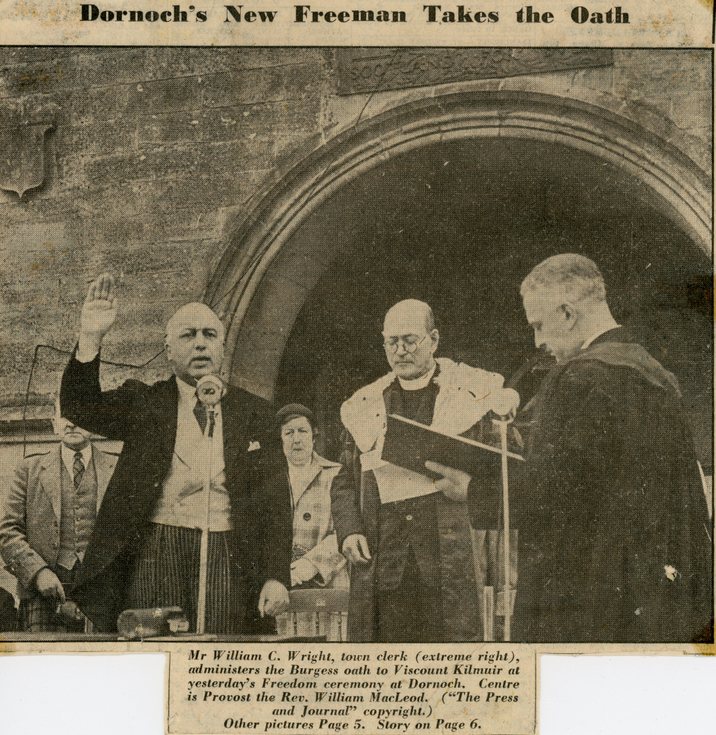 First of four newspaper clippings from the Northern Times recording, with monochrome photograph, the Viscount Kilmuir's Freedom of Dornoch ceremony on 1955 April 15th. Viscount Kilmuir was the second Lord Chancellor to be made a Freeman, the previous one being Viscount Jewitt in 1946. Viscount Kilmuir received the Freedom in recognition of his services to the State, his position as Lord Chancellor, his pre-eminence in the adminstration of the laws of the country, the sympathetic interest shown by him in the great social problems of the day and his family ties with Dornoch and the parish.
The photograph shows left to right Viscount Kilmuir with his raised hand, Rev. William MacLeod; William Wright Town Clerk.
Picture added on 05 December 2018 at 10:35
This picture is in the following groups
Freedom Ceremonies
Comments:
ON THE LEFT BEHIND ELBOW JIM MACDONALD ~ Thank you for the identification. ~ Administrator.
Added by CALUM GRANT on 03 February 2019
Also in the photo is Catherine S McCulloch (nee Moore)
Added by Jean Keighren on 14 April 2019