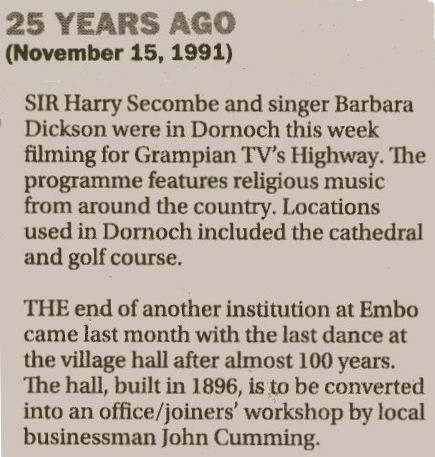 Extract from the Northern Times of 15 November 1991, reprinted in 'From our old files' recording that Sir Harry Secombe and singer Barbara Dickson were in Dornoch filming for Grampian TV's Highway programme, featuring religious music from around the country. Dornoch Cathedral and the Golf course were included in the filming.

The report also marks the end of another institution at Embo, with the last dance at the village hall after almost 100 years. "The hall, built in 1896, is to be converted into an office/joiner's workshop by local businessman John Cumming
Picture added on 08 March 2017 at 15:37
Comments:
Yes, the dances at the old Embo hall were something to remember. In the 1950s and 60s all the young people from the village and places around would gather there in their best outfits. The boys would try and impress the girls with their good looks and dancing prowess. While this was going on the girls would gather in little groups at the edge of the dance floor and pretend to show no interest is these conceited and vain displays. On the stage bands would be belting out traditional Scottish dance music such as the Dashing White Sergeant, Strip the Willow, The Eigthsome Reel etc with occasional waltzes and slow foxtrots to allow everyone to cool down and catch their breath. And in case I forget I must mention that several Embo boys, who must of course remain nameless, that were somewhat of a hit with girl tourists “from the South”, or what we generally referred to as “The Visitors”.
Of course, at most of these dances there were many boys, and occasionally even girls, that had a dram too many and they either wanted to dance all night, or more often than not, fight the night away. I even remember occasions where the dances became a bit boring and friends would start fighting each other in the hope that a peacemaker would step in and stop them, and then both turn on this unfortunate fellow to get a good shindig going. However, there was always a bobby on duty at the door keeping an eye on things, and he always managed to break up such fights before they got too out of hand.
In the late 1970s, I was serving in the BSA Police in the then Rhodesia when I met a fellow Highland Scot who was serving in the Rhodesian SAS C Squadron. He had previously been a member of the British paras. When I mentioned that I was from Embo he was very surprised. It turned out that he was from the West Coast somewhere, and he took great delight in telling me that he had attended several dances at the Embo Hall in his youth, and there he took part in, and enjoyed many a good fight there!