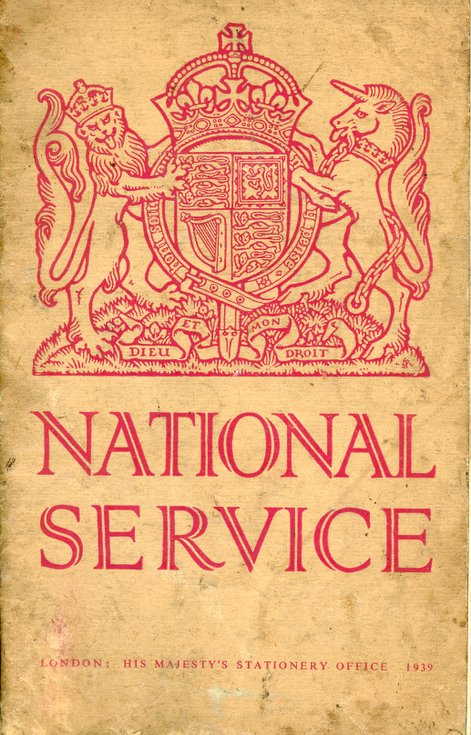 His Majesty's Stationery Office publication 1939 'National Service', a guide to the ways in which the people of the country may give service, with a message from the Prime Minister. The booklet of 45pp has a reproduction of a copy of a handwritten letter from the Prime Minister, Neville Chamberlain, dated January 1929, on the reverse of the title page invoking the people to play their part to secure peace. Following a foreword by the Right Honourable Sir John Anderson, MP, Lord Privy Seal, the booklet covers the use of the guide to volunteer for National Service in Air Raid Precautions, the Police, Fire Services, Nursing and First Aid, Evacuation of Children from Dangerous Areas, Women's Land Army, Mercantile Marine, H.M. Coastguard, Royal Navy and Royal Marines, Army, Royal Air Force, Special Registers for Medical Practitioners and those with Professional, Scientific and Technical qualifications, and a General Reserve for those willing to serve "but who cannot for the moment be accepted for any of the services mentioned in this guide". Forms for application and enrolment, with pre-paid postage, are included in pull-out centre pages. The final two pages provide and index.
Picture added on 21 February 2017 at 14:05