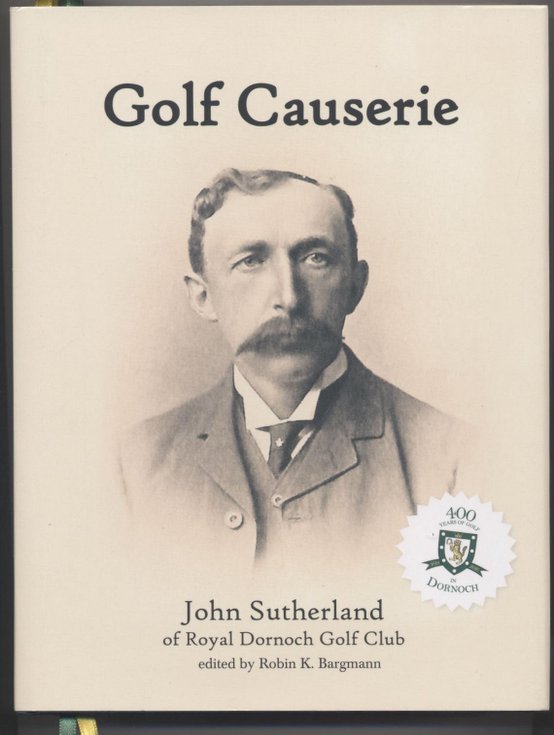 Copy of Golf Causerie by John Sutherland edited by Robin K Bergmann with contributions by Robin Bergmann and Todd E Warnock. The Preface is by Dennis M M Bethune, with two Forewords by Peter Allis and Philip Truett. The Introduction I ‘John Sutherland – ‘A Grand Man’ is by Robin Bergmann and Introduction II – ‘A Portrait of an Extraordinary Man’ is by Todd Warnock. They are followed by ‘A Dornoch Gallery’ with the majority of images from the Historylinks Museum collection. A contents list at page 3-13 is followed by an extract written by the Editor The Daily News explaining that under the heading of ‘Golf Causerie’ each Tuesday morning the newspaper published an article from the pen of John Sutherland. A reprint of the published ‘Golf Causerie’ from 20 Nov 1906 to 20 Apr 1912 appear on pages 15 – 458. Published in Scotland by Robin Bergmann (ISBN 978-90-821625-2-3) the book has a green linen hardcover with gold embossed title on the front and spine. The dust cover bears a monochrome photograph of John Sutherland and icon of 400 years of golf in Dornoch. Unusually the reverse of the dust cover has a line-print of sketches of the Dornoch skyline and golfers
Picture added on 23 September 2016 at 15:34