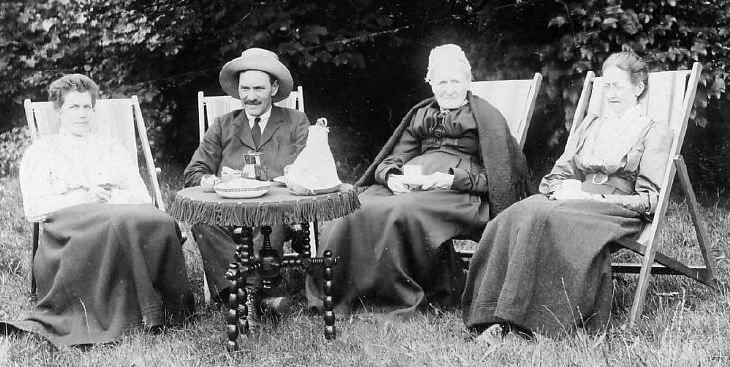 Postcard of a man and three women sitting outside in deckchairs with tea things on an ornate table in front of them. Marked (recently) on the back "Staff at Links House". From envelope marked Maclean photographs.

The title "Staff at Links House" would refer to the staff of Links House or staff from else where?

If they are known to be the staff of Links House this will be interesting.
My 2nd great aunt Annie MacKay was a member of Dr George Kennedy's staff at Links House from around the late 1890's.
She lived at 6 Castle Street and was born in 1870 at Fleuchary.
As far as I am aware no close family member has a photo of her.

I am not sure if she worked until the death of Dr Kennedy (she would have been 73 in 1943 when he died) but would certainly have been around for a staff photo circa 1890 if this was at Links House.
In the 1891 census she was at Pitgrudy Farm servant's house with her father and siblings. Her mother had died three years before and her "job description" there is housekeeper but she was not employed.
In the 1901 census she was recorded at Links House as servant with the role of "House-table Maid Domestic".
In that census a Jane MacKay (not a direct relation) aged 67 is another servant with her role as Cook.
Another servant in that census is Elizabeth MacKay (not a direct relation) aged 15, another servant, with the role of Kitchen Maid.

If this photo is from around 1890-1900 (if this was at Links House) then Elizabeth being in this photo would not be likely. The yougnest person, the lady on the left, looks older than 14.
I am wondering then if that lady is my 2nd great aunt Annie Mackay (the date of "1890" is I guess not certain, as mentioned, Annie was not employed at Links House in that year) or maybe the lady on the right.
The eldest person, the lady wearing the shawl, second from the right, would be of Jane MacKay's age (considering working conditions of that period could make people look older than they were).

Jane and Annie were still members of staff at Links House in the 1911 census.

Of course the caveat is that the information (Staff at Links House) on the back of the post card is recent.

- It is difficult to give a definitive answer I'm afraid. The photo came to us in an envelope marked 'Maclean photos' and the wording on the back was fairly recent. Therefore it is open to interpretation. Sorry we can't be more precise. - Administrator
Added by MASIS PANOS on 30 December 2017
Hello,
I can confirm that the lady seated on the left is my 2nd great aunt Annie MacKay and the location was at Links House.
Having been in Dornoch earlier this month I met my cousin Helen MacDonald who has an original of this photograph with the names of the persons on the back: from left; Annie MacKay, Angie, Jane MacKay and B. Grant. The date is likely 1910 rather than 1890. Jane MacKay remained a domestic servant at Links House until her death in 1913. ~ Thank you very much for the information. I have updated the date of the image. ~ Administrator.
Added by MASIS PANOS on 26 July 2018