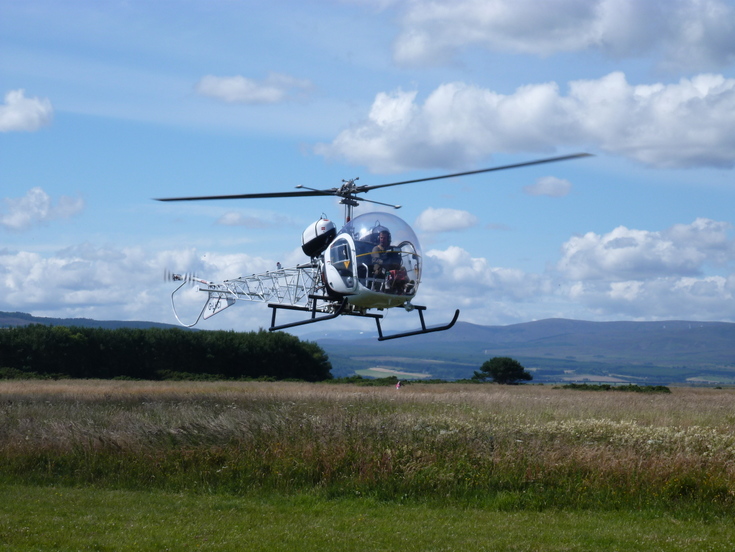 Fascination for spectators increases with the arrival of a Bell H-13 helicopter at 11.15 on day one. The sole rotary aircraft to the fly-in, the Bell H-13 is a two-bladed, single engine, light helicopter designed and initially built by Bell Helicopter. Under licence, Westland Aircraft manufactured this 'helicopter for the British military, designated as the Sioux AH.1 and HT.2. The technical specifications are: Top speed: 105 mph Range: 273 miles Weight: 2,952 lbs Cruise speed: 84 mph Wingspan: 37' Length: 32' Engine type: Lycoming O-435.
Picture added on 19 January 2016 at 12:29
Comments:
Whilst serving as a Captain, Gurkha Signals in Borneo during 'Confrontation' 1965-66 I had personal experience of the excellent reconnaissance and communications role of this helicopter. A Sioux, piloted by Captain David Mallam, Royal Tank Regiment, was tasked for a whole day to enable me to conduct reconnaissance and proving of mountains in Sabah which could serve as a radio rebroadcast site. The 51 Gurkha Infantry Brigade area, covering Brunei and extensive parts of Sabah and Sarawak, was about the size of Wales and initially its ‘Command’ radio network was High Frequency (HF). In the tropics HF radio can suffer interference, particularly at night when it was often the case that we had to resort to morse rather than voice communication Early in 1965 the Brigade Signal Squadron embarked on the construction of directional antennae so that, with the siting of rebroadcast stations on mountain tops to gain line-of-sight radio paths we could significantly extend the range of the C42 Very High Frequency (VHF) radio. With a series of trials we eventually determined the best design of antenna to achieve at least a three-times increase in the range of the C42 radio. A high priority was then given to the conversion of the Brigade Command Net to VHF. My single day in the Sioux enabled the selection of potential rebroadcast sites and, with hovering over the summit, the proving of radio paths. Thus Lumantan a mountain in Sabah became a principal component in the establishment of reliable VHF radio communications for the brigade. In the jungle terrain it would have been an extremely difficult and prolonged task to have undertaken this reconnaissance by other means.
Added by John Barnes on 25 January 2016