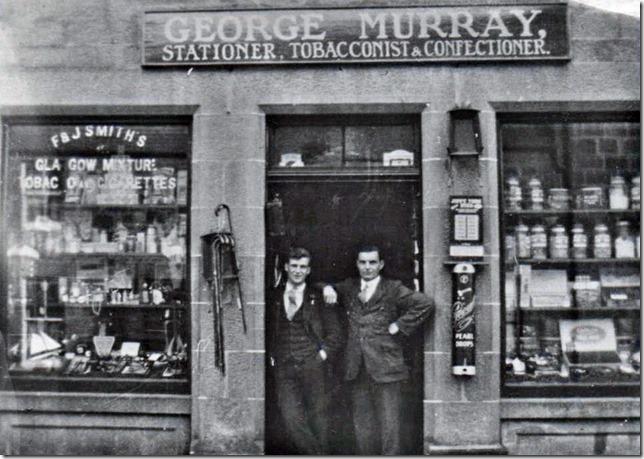 Monchrome photograph showing George Murray, on the right, standing in the doorway of his Stationer, Tobacconist and Confectioner shop in Castle Street, Dornoch. (The shop no longer exists and has been converted into a house.) The donor's family history research leads to the conclusion that this is George John Murray b 1893 the son of Neil Murray who had the Baker's shop in Dean Street, Dornoch. George was mobilised with teh 5th Seaforth Highlanders in August 1914. He achieved the rank of Sergeant and was awarded the Military Medal and Croix de Guerre. The Military Medal was awarded for an incident whilst trying to cross a corn field which was under heavy fire from a German machine gun. Sgt Murray alone made a detour and single handedly put the gunners out of action and rushing forward captured the gun and post. The Croix de Guerre was awarded for bravery in the field. On 13th Oct 1918 at Avesnes-le-Sec near Cambrai he ws so badly wounded that he lost one of his legs. He died in Donroch in 1929 aged 36 and had a Military Funeral headed by Pipes and Drums followed by the Territorials with a firing party and bugler. The coffin was draped in a large Union Flag.
Picture added on 21 May 2015 at 10:24