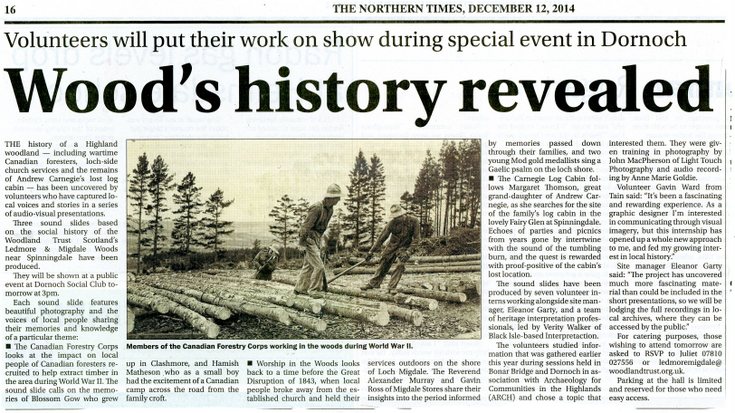 Article published in the Northern Times of December 12, 2014 with the heading 'Volunteers will put their work on show during special event in Dornoch - Wood's history revealed' The article provides advance notice of a public event at the Dornoch Social Club on Saturday 13 December, with the showing of three 'soundslides', short audio visual presentations on the human heritage of Ledmore and Migdale Woods. Each 'soundslide', produced by volunteer interns, features beautiful photography and the voices of local people sharing their memories and knowledge of a particular theme. Historylinks Museum collaborated with the Woodland Trust with the provison of images for the soundslides.

In 'The Canadian Forestry Corps', Blossom Gow and Hamish Matheson provide memories of the Corps stationed at Spinningdale during World War 2.

In 'Worship in the Woods' the Rev John Forbes, Rev Alexander Murray and Gavin Ross narrate the Great Disruption of 1843 when local people broke away from the Established Church and held their church services in Migdale woods.

The audio recordings are to be added to the Historylinks Museum collection.