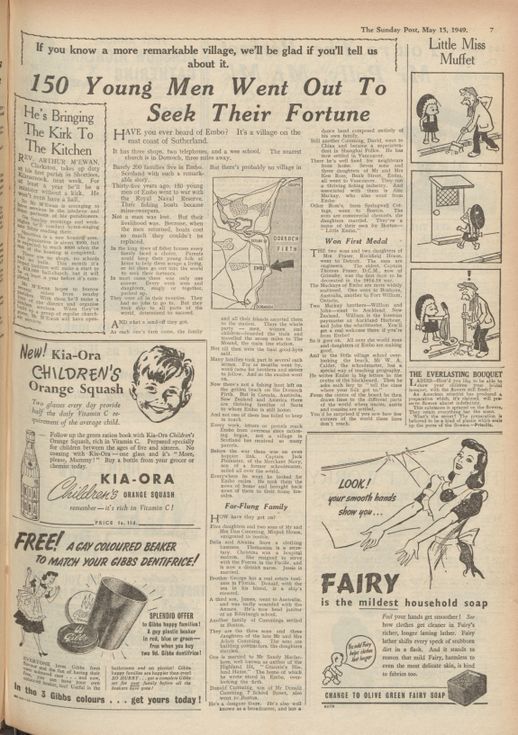 With a long history of emigaration from Embo, the article draws attention to the constant flow of parcels from overseas to alleviate the rigours of rationing in the UK post war. Kenneth Mackay recalls his parents receiving food and clothing parcels during the war from relatives in the US and Canada. On one occasion in about 1944 his Aunt Alexina in California sent a parcel of clothing, with Hershey chocolate bars, amongst which was a brand new cowboy type shirt and a pair of fashionable light-weight tweed trousers with a distinctive dog tooth pattern. As the recipient of these items he could not wait to wear them next day to Embo School to show them to his teacher Mrs Bremner. He chose a desk next to a walkway and sat with his legs partly sticking out into the walkway to show off his new trousers. His teacher stopped to congratulate him on his newly acquired clothes but then set him back by saying "Beautiful clothes indeed and especially those trousers. But it's a pity that your aunty did not send you a pair of socks and shoes as well." When he looked down at his two bare feet they were in need to a good wash and virtually all his toe nails were chipped and stained with blood that he had accidentally kicked on his way to school. He has fond memories of Mrs Bremner, a kind and sympathetic teacher who took a great deal of interest in the progress of all the children in the several classes she taught simultaneously. However there was one disadvantage in these several classes sharing one room. Inevitably there was at least one sibling present if any scholar fell foul of the teacher and they were never shy to carry tales of events home. In those days teacher's words and decisions were law and parents only took one side in any teacher/scholar dispute!

Open Document
Picture added on 21 December 2014 at 17:36
Comments:
Does anyone have old photos of Embo and people of Embo from 1940 upwards. I am Embo born and bred and would love to see old photos. Please.
Added by Georgina Moore on 29 March 2015
With reference to Mr Phimisters' son Jack who Kenneth mentions above, he retired back to Embo when I was quite young,around 1966,having served as a Master Mariner (captain) in the merchant navy for a number of years,Jack was a very pleasant and amiable man, but, wo betide anyone who chose to cross his bow!!
On one occasion I was in the car with him heading to Dornoch, going up the brae at Embo street, a tourist towing a caravan came down the brae towards us and commited a dreadful sin, he drove passed a passing place without stopping!!Jack stopped his car, pulled on the handbrake and got out to go and educate the poor tourist on the finer points of driving on single track roads,I stayed in the car but could hear the raised voices and see lots of arm waving, particularly on Jacks part, he then started to walk back towards his car and it became obvious that the tourist didn't know how to reverse with his caravan attached, with the help of his family he unhitched the caravan, pushed it back up the hill to the passing place, then reversed the car and hitched up again.
Jack came back into the car, smiled and said "that'll teach the so and so". Not a man to cross.
Added by John Mackay on 08 June 2016
Many thanks for posting your memories of Jack.
Added by Administrator on 14 June 2016