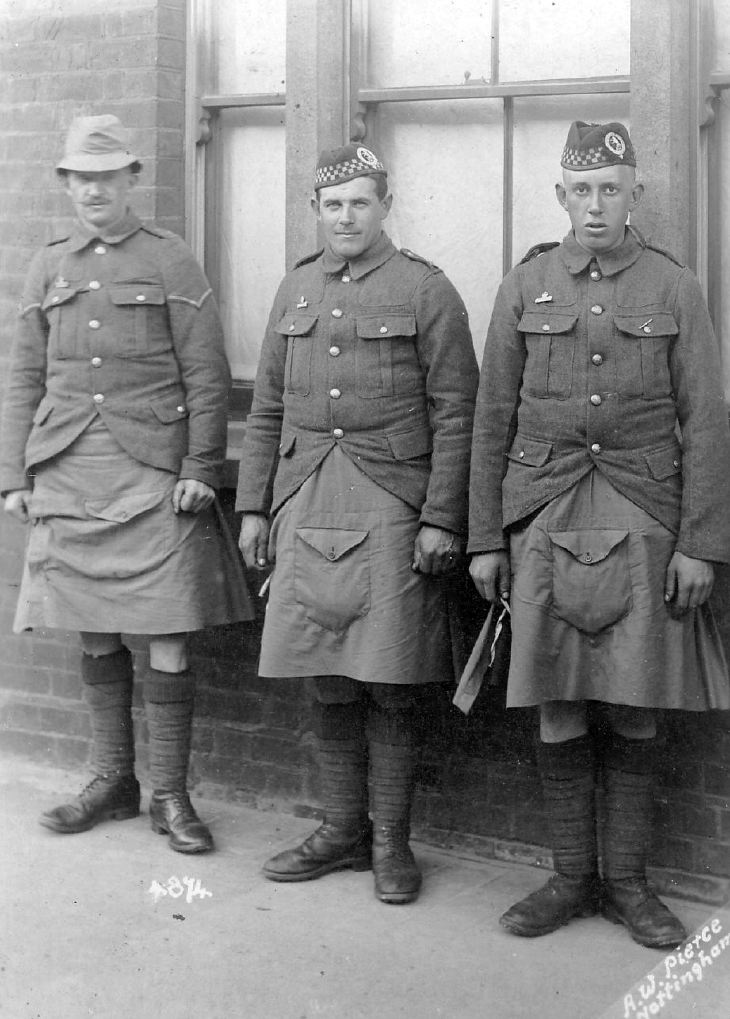 Photo of three Highland soldiers, taken at Bedford. Soldier on the right also appears in picture #1134 and the Lance Corporal on the left wearing the different headdress in picture #1156 A June 2016 Image Library comment identified, from ther cap badges, the two soldiers on the left as 1/5th Seaforth Highlanders The LCpl is wearing the 'Ghillie Hat' a short-lived item of dress particular to the 1/5th and 1/6th Seaforths in the weeks prior to their departure from Bedford.i The soldier on the left appears in the 'Ghillie Hat' in picture #1134.
Picture added on 24 April 2008
Comments:
1/5th Seaforth Highlanders outside their billet in the 'Black Tom' area of Bedford c. April 1915 (dateable by the from of headgear worn by the l/cpl on the left)
Added by Richard Galley on 22 June 2012
According to information gleaned from bedfordhighlanders.blogspot.co.uk/ this photograph was probably taken shortly before May 1915 in Bedford, England. This is where 51st (Highland) Division, Territorial Force was stationed while it underwent intensive infantry training in preparation for the Western Front. Although based in Nottingham, A W Pierce (photographer) took countless photographs of the division during this time. While the regimental cap badges confirm that the two soldiers centre and on the right are 1/5th Seaforth Highlanders, the battalion of the Lance Corporal to our left of the photograph cannot be ascertained because the website infers that he is wearing a 'Ghillie hat.' This was a khaki canvas cover worn over the Glengarry. These were a short-lived item of dress particular to the 1/5th and 1/6th Seaforths in the weeks prior to their leaving Bedford 2nd/3rd May 1915. All three soldiers are wearing calf length 'puttees' which were replaced in favor of shorter ankle length versions (depending on availability, supply and personal issue to the individual soldier in a unit) later on in 1915.
Added by James Gray on 02 April 2016
Thanks for the mention of my website, James! A slightly pedantic point of order, if I may? The 1/1 (Highland) Division (known simply as, 'the Highland Division' during its time in Bedford) only became the 51st (Highland) Division on 11 May 1915, a week after its arrival in France.

The Glengarry cover was issued only to the 1/5th and 1/6th Seaforth while they were in Bedford and were dispensed with shortly after arrival in France.

Given that the 1/5th and 1/6th Seaforth billets were separated by a distance of about 3/4 of a mile and that the billeting districts were, effectively, 'closed' communities I think it's safe to assume that the lance corporal in this photograph is a 1/5th Seaforth man.

All three men wear the 'Imperial Service' badge over their right breast pocket. This indicates that, as Territorial soldiers, they had signed-up for active service overseas. The badge was usually in white metal, but sometimes brass. In the rectangle are stamped the words 'Imperial Service' and the device is surmounted by the King's crown. A Territorial's basic contract did not allow the man to be sent overseas on active service, unless he volunteered to do so. The vast majority of the Highland Division's soldiers signed up for 'Imperial Service' shortly after they arrived in Bedford.

The Territorials' transition from spats and brogues to ankle boots and puttees started to be noticed in late 1914 / early 1915. Word was coming back from the Front that shoes and spats were proving impractical in the thick, cloying mud of France and Flanders. Ammo boots and puttees were a more secure form of footwear in such conditions, the puttees serving to seal the neck of the boot and also adding a layer of insulation to the lower leg!

The mens' khaki canvas kilt covers (with integral 'sporrans') are worn over the woollen regimental kilt (Sutherland tartan for the 1/5th Seaforth, as opposed to the Mackenzie worn by all other Seaforth battalions). These covers were a throw back to the Boer War and worn by Highland troops for the duration of the Great War.
Added by Richard Galley on 07 April 2016
Thank you for your invaluable information Richard and for correcting me on the division's correct title prior to 11th May 1915. I hope I can tempt you to provide us with many more fascinating snippets from your wealth of knowlege. I found your website fascinating, especially as I had relatives who had served with 1/5th (Sutherland and Caithness) Battalion, Seaforth Highlanders and were stationed in Bedford at this time. I hope I am not in trouble with you for breach of copy-write or any plagiarism infringements! Also, I have some more WW1 era photos of the battalion in my personal possession, some of which may also have been taken in Bedford. If you provide me with your details, I can send you them privately if you like.
Added by James Gray on 12 April 2016