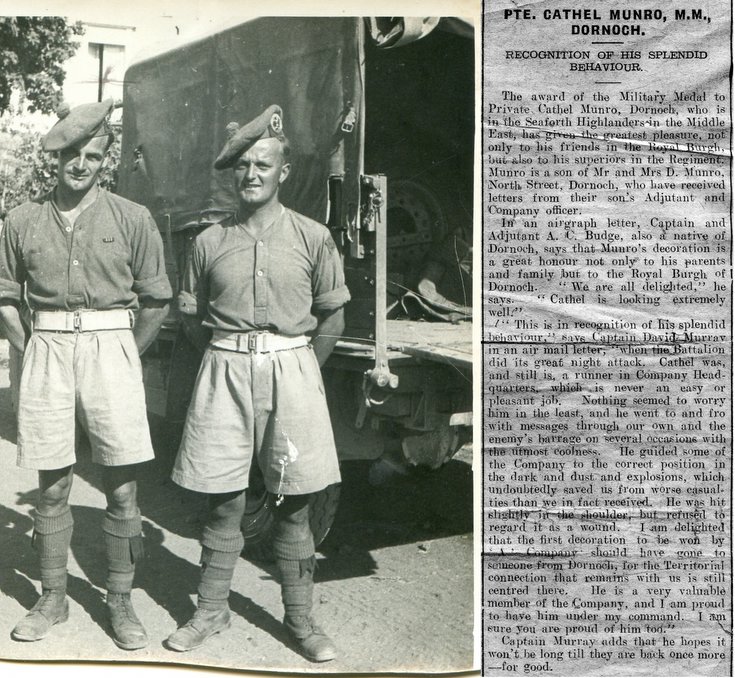 A copy of a monochrome photograph showing Cathel Munro, Military Medal on the left, with an unknown comrade, taken in Picasso Italy 4 August 1943. The accompanying newspaper cutting records the award of the Military Medal to Pte Cathel Munro while serving with the Seaforth Highlanders "in the Middle East". He was the son of Mr & Mrs D Munro of North Street, Dornoch and the cutting records that in an airgraph letter received by his parents "Capt and Adjutant A. C Budge, also a native of Dornoch, say that Munro's decoration is a great honour not only to his parents and family but to the Royal Burgh of Dornoch.". Later in the article, in an air mail letter to his parents, Captain David Munro records the award as being "in recognition of his splendid behaviour.....when the Battalion did its great night attack. Cathel was, and still is, a runner in Company Headquarters, which is never an easy or pleasant job. Nothing seemed to worry him in the least, and he went to and fro with messages through our own and the enemy's barrage on several occasions with the utmost coolness. He guided some of the Company to the correct position in the dark and dust and explosions, which undoubtedly saved us from worse casualties than we in fact received. He was hit slightly in the shoulder, but refused to regard it as a wound. I am delighted that the first decoration to be won by 'A' Company should have gone to someone from Dornoch."

Open Document
Picture added on 11 August 2013 at 10:09
Comments:
This is my Uncle Cathel Munro of Roseville, North Street, Dornoch. Please see more information for this Munro family on No. 10318.
Added by Sandra Wilson (Munro) on 24 June 2015