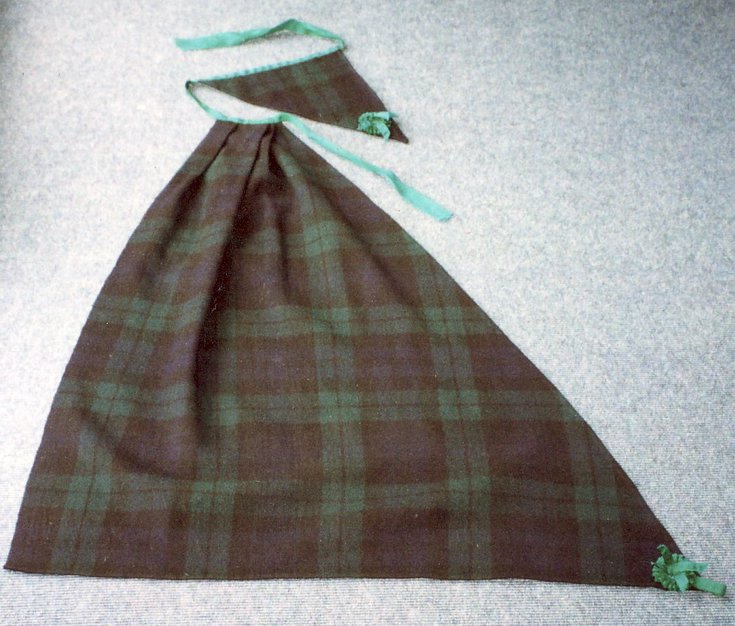 Fly plaid in the Government or Black Watch tartan worn by the Sutherland Rifle Volunteer battalion of the Seaforth Highlanders. The plaid is triangular. The bottom and one long edge are hemmed, the other long edge is rough. The top is pleated and sewn to an emerald green linen tape. A much smaller triangle of the same tartan is also sewn to the tape without pleats. The length of the tape is about 124cm. The two triangles of tartan are sewn in about 36cm from each end. The smaller triangle is 27cm across at the top, the larger is 12cm and they are 13cm apart. Both triangles have a rosette made of the green tape at one corner. There is some wear or moth damage near the pleats of the larger triangle.

From Queen's Own Highlanders Seaforths and Camerons by Angus Fairrie: "The officers' belted plaid was fixed at the left shoulder with a plaid brooch and was buckled round the waist with a strip of tartan under the skirts of the coatee or doublet. It was worn in different colours of dress by both the Seaforth and the Cameron Highlanders. It was worn in the Queen's Own Highlanders by the Bandmaster, who wore an officers' belted plaid of 79th or Cameron of Erracht tartan.

The soldiers' belted plaid, known as the fly plaid (fly may possibly come from the Gaelic feile), was also fixed at the left shoulder by a loop of tape. Since full dress was discontinued in 1914, the fly plaid has only been worn by drummers. The drummers of the Queen's Own Highlanders wore the fly plaid of the 79th or Cameron of Erracht tartan, and it is worn by the drummers of The Highlanders."

This was given with the uniform of a Colour Sergeant Instructor of 1st Sutherland Highland Rifle Volunteers between 1881 and 1908, which belonged to William Bethune of Bonar Bridge.
Picture added on 17 June 2012 at 10:55