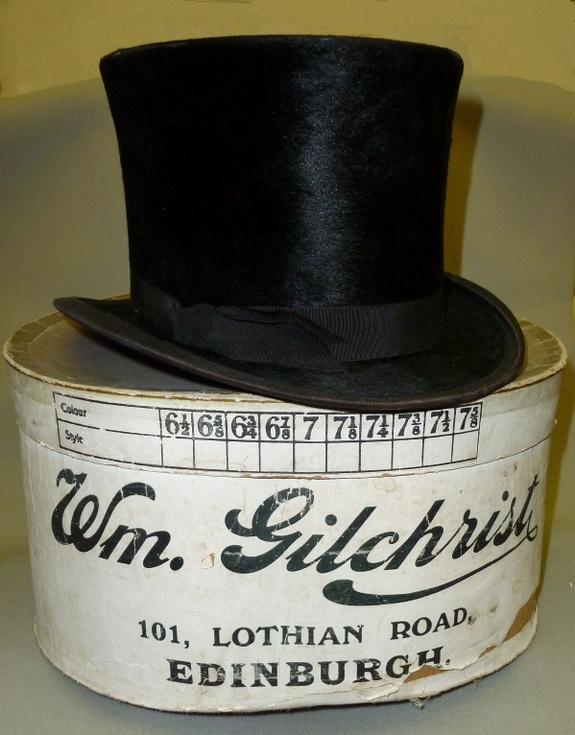 Top hat (a) in box (b). The hat is hand made, oval in shape with brim curving up at the sides. It is covered with black fabric with a fine fur nap that lies in one direction. This is worn round the rim at the top of the crown and in patches on the brim, presumably where it has been held to lift the hat on and off. There is a black satin ribbon round the base of the crown, finished in a flat bow at one side, and the brim is edged with the same material. Sewn to the inner edge of the underside of the brim is an inner band of thick leather look cream paper, with a cream satin bow at the back. The shaper for the crown can be seen behind this, lined with hessian. The inner lining is cream satin, marked SPECIAL MAKE. The inner band is marked A.1 DRAMA SOCIETY in pen. The band has been padded out to improve the fit, first with a strip of newspaper (Scotsman) dated 1919, then with tissue paper, then with a piece of 1989 newspaper (P&J).

The box is oval, made of white cardboard with a lift off lid. The base of the box is marked Wm. Gilchrist 101 LOTHIAN ROAD EDINBURGH. The lid of the box is printed with a list of sizes from 6 1/2 to 7 5/8. Size 6 3/4 has a pencil mark against it. The box is in poor condition and has been mended with sellotape.

The information supplied with the hat is that it was owned by Andrew Innes, a painter in Dornoch in the 1930s. The hat must have passed through a number of hands, as it appears to be of late 19th century make (1880 on?), was being worn around 1919, was owned by Andrew Innes in the 1930s, and at some point passed to the Drama Society, who presumably put in the piece of 1989 newspaper. The box may well be the original box for the hat. It is exactly the right size and shape and the hat size marked on it could be the size for this hat, which is quite small.
Picture added on 09 March 2012 at 10:46