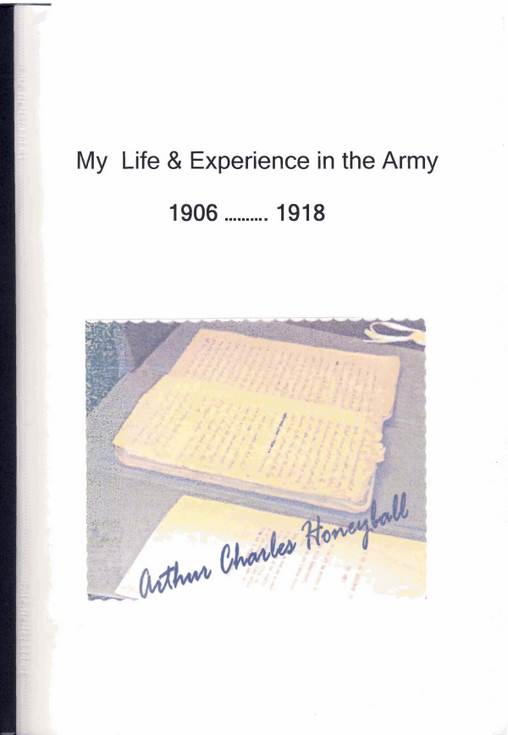 A 25 page document written by Arthur Charles Honeyball with the title 'My Life & Experience in the Army 1906 -1918'. The first 8 pages cover his service from 1906 in the Cameronians (Scottish Rifles) in India, South Africa and, from July 1914 until he was wounded on 22 October 1914, with the British Expeditionary Force in France and Belgium. This initial part of the account is of particular importance because he recalls (page 6 to 7 with a diagram at page 8) as a Corporal being with Captain Ronald Hugh Waldron Rose. Cameronians (Scottish Rifles (see 2008.140.01) when he was fatally wounded. Despite being wounded himself, Cpl Honeyball managed to regain the British lines and was medically evacuated to the United Kingdom. After treatment, convalescence and appearance before medical boards he was drafted into the 13th Battalion Scottish Rifles, a 'Bantam Battalion' for servicemen less than 5ft 1 in tall. He was promoted Sgt and appointed Company Quartermast Sergeant, responsible for resupply of his Company and followiing the Battalion's amalgamation with 14th Battalion Highland Light Infantry, he returned to France. His account of this period of his military service provides a fascinating insight to the problems facing CQMS in resupplying their company trench positions.

Arthur Honeyball's daughter Mrs Stella Barber offered this document to the museum after she had seen the Capt Rose War Diary (see 2008_141_01-05) on the Historylinks Museum website. With her agreement this document has been incorporated in the museum collection with permission for its use for display purposes. An extract of Cpl Honeyball's experience in the action in which Capt Rose was killed, including the diagram drawn by Cpl Honeyball, has been added as a postscript to the Capt Rose War Diary page on the museum website. (see also 2011_093_02 a reworking of the diagram for greater clarity)

Open Document
Picture added on 14 October 2011 at 10:23
This picture is in the following groups
Capt Rose document collection
Comments:
I looked up the Honeyball family and am wondering if there is any relationship to an Arthur Honeyball who managed Ballygoran Stud near Maynooth in Co Kildare.
His wife was French i think and they had a son called Terence.

Thank you for your comment. We do not have any further information about Mr Honeyball but perhaps someone else looking at the Image Library could help? - Administrator.
Anonymous comment added on 03 March 2012
I have just added Arthur Charles Honeyball's #LifeStory to IWM's Lives of the Great War
He was born in Battersea and worked in the tramways dept of London County Council, presumably after WW1