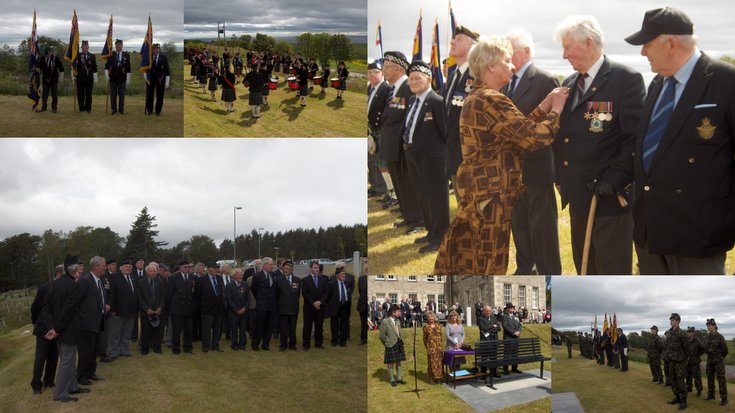 The very first celebration of Armed Forces Day was held at Drummuie, the offices and grounds of the Highland Council offices at Golspie. The impressive building looking over the A9 and across to the North Sea was the old site of the Sutherland Technical School and provided a wonderful backdrop to the Parade and Flag Raising Ceremony.

The day started with the Veterans and public gathering inside and outside the building for tea, coffee and small bites.

After refreshments the Sutherland Schools Pipe Band under Pipe Major S Monaghan and Drum Major A Cameron marched onto the Parade area to entertain us with a wide selection of music before and during the ceremony.

This was followed by the Standard Bearers from the Royal Naval Association Golspie, and the Royal British Legion Branches from Rogart & Lairg, Dornoch, Creich & Kincardine. Lt Col Colin Gilmour MBE DL then requested that the Veterans should take up their position on the Parade area. There were some 70 Veterans on parade to commemorate this the first Armed Forces Day Parade.

The parade was commanded by Sergeant Major David Mackenzie and was greatly enhanced by members of the Dornoch and Brora Detachments of 1st Battalion The Highlanders Cadet Force, taking their positions up either side of the colourful standards.

The raising of the Armed Forces Day Flag was carried out by William Munro from Lairg. On completion of the flag raising and General Salute, Lt Col Colin Gilmour MBE DL gave a welcoming speech and then handed over to Jonathan Brett Young to announce the Veterans who wished to have their Veteran Badges presented. The presentation of the badges was carried out by the Deputy Lieutenant Flower Thomson.