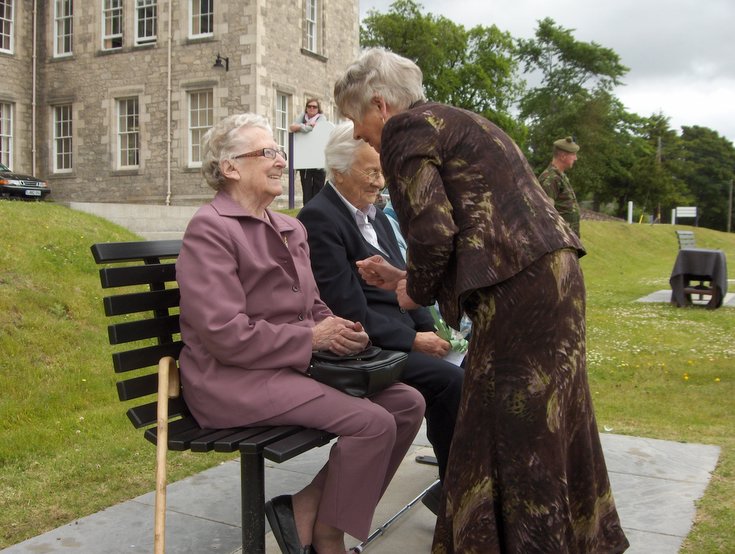 Sheila Broadbent, as she then was, would never have joined the WLA had it not been for her poor eyesight. In 1941 when she was 18 she wanted to sign up with the Women's Royal Air Force but was summarily rejected after an eye test. So began, almost by accident rather than design, three golden years for Sheila. Living in Greenfield near Oldfield, Sheila was one of 34 girls from Lancashire sent by the Land Army to help the war effort in Wrexham, North Wales. They were instructed to bring with them their national health and unemployment insurance cards, medical cards, gas masks, ration books and clothing coupons. Unfortunately Sheila left her gas mask on the train and went through the war without it! The girls were billeted not at a Land Army Hostel but at a Royal Ordnance Factory Hostel at Rhosnessney near Wrexham where they occupied one block, with other blocks occupied by chemists and boffins working at a nearby underground munitions factory. Sheila was later to plough the ground on top of the factory. She recalls siting down to dinner with the factory workers who were yellow as a result of handling nitroglycerine, whereas the Land Army girls were bronzed and health from being in the fresh air and sunshine. The Royal Ordnance hostel had the advantages of a dance hall and concert hall and Sheila found it a good place to be. The only downside was that they did not enjoy the double rations available in Land Army hostels. A week after arriving Sheila was given a rudimentary driving test and was then told whe was to ba an official Land Army driver. From then on she drove the rest of the girls to and from various farms as well as transporting machinery and other equipment to outlying farms. She recalls the girls were paid 38 shillings for a 48 hour week, out of which was deducted £1 for board and lodgings. Overtime was payable at a rate of ninepence ha'penny an hour. When not driving Sheila worked at various agricultural jobs. Her Land Army service from 1941 to 1944 she says: "We worked hard and it wasn't always sunny weather, but I had a wonderful, wonderful time. I loved every minute. It was a happy time. The camaraderie was brilliant."